Today’s post features not just one book, but four! It also has an excerpt from one of the books and a giveaway.

So make sure you read all the way to the bottom so you don’t miss anything!

Check Out These Series From Christina Bauer

– Fairy Tales of the Magicorum

, a series of modern fairy tales with sass, action, and romance
– Beholder

, a dystopian adventure with science, snark, and hot aliens
– Angelbound

, about a quasi (part human and part demon) girl who loves to kick butt in Purgatory’s Arena 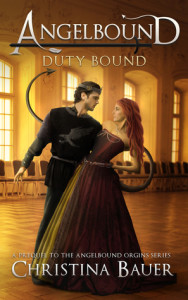 “Christina Bauer has blessed us, people! This book, written from Lincoln’s perspective, was simply a treat that I most definitely enjoyed!” – The Reading Life

As the High Prince of the demon-fighting thrax, Lincoln knows he must marry for political gain. Not that he minds. For all of his eighteen years, Lincoln’s been bound to his duty. Fighting demons is his life, and he’s never given romance a second thought. Instead, the High Prince lives for the days when he leaves his hidden realm to fight demons on Earth.

“I call dibs on Lincoln as my book boyfriend and main squeeze.” – Accidental Reader

Lincoln and his nobles become forced to visit Purgatory, the home of quasi-demons (who are mostly human with a bit of demonic DNA). Here Lincoln spies Myla Lewis, a lady warrior who enflames his heart, ignites his interest, and inspires his respect. Trouble is, Myla’s also a quasi. By thrax law, Lincoln must kill anything demonic—not date them.

For the first time in his life, Lincoln wonders if he’ll follow his duty…or heed the demands of his heart.

Don’t miss this prequel novella to the best-selling Angelbound, told from Prince Lincoln’s point of view! 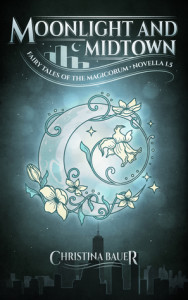 Years ago, Elle — never call her Cinderella — escaped her evil step family in order to build a new life for herself in Manhattan. Today, Elle’s awful past is a distant memory. In fact, Elle even attends West Lake Prep, an exclusive high school where regular humans mix with members of the Magicorum, such as fairies, shifters and witches. Although she still must live in hiding from her evil step family, Elle always has found ways to get whatever her heart desires.

That is, until Alec Le Charme. Sure, Alec is the heir to the Le Charme dynasty of high-end jewelers, but he’s also kind, charismatic, and has a knee-melting smile.

Long story short, Elle has fallen for Alec, hard. Unfortunately, thanks to Elle’s evil step family, the Le Charme heir is absolutely off limits. In fact, if Elle and Alec so much as kiss, it will start a magical chain reaction that would end in powerful factions of witches and wizards going to war. As a result, Elle and Alec vow to stay friends, no matter what. Then West Lake Prep holds a masquerade ball. Identities get mixed up and forbidden kisses are finally shared.

Time for the Magicorum to go to war, and for Elle to confront her hidden past in ways she never thought possible. 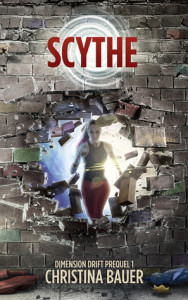 A prequel novella to the new series from USA Today‘s ‘must read YA paranormal romance’ author, Christina Bauer.

On second thought, judge away. Learning Squirrel is one step above attending class in a junkyard. But what do you expect? Everything’s made out of garbage these days. At least, I have my freelance work to keep Mom and me housed, clothed, and fed. How? I’m your regular high school science geek for hire… only my work manipulates space-time. These gigs pay really well, but the government wants people like me dead. Good thing I’m super careful about hiding from their detection systems.

Then I screw up a job. Badly. My house slips into two-dimensional space-time. It only lasts for a few seconds, but the move still sets off about a dozen government alarms. If they track me down, Mom and I are good as dead. Long story short, I need to pay someone off, hide the evidence, and keep us safe.

Unfortunately, that means asking the Scythe for help. He runs the local underground crime scene and has absolutely no conscience. Or I’m pretty sure he doesn’t. It’s hard to think straight when a guy’s that hot in an evil Mafioso kingpin kind of way. More importantly, he’s a crime lord who can conceal my slip-up with a few clicks on his minion’s computer keyboards. But the Scythe has his price. In this case, he wants me to finish a certain dimensional prototype for him in twenty-four hours. I can do it, but it might mean Learning Squirrel High gets blown up in the process. Oh yes, and there’s also my new hot classmate who may or may not be an alien… and he says he’ll do anything to help me.

This job won’t be easy, but I’ve gotten out of worse scrapes. Maybe.

This new series is perfect for: fans of urban fantasy, action & adventure, cool science, evil corporations, forbidden romance and hot new classmates who may or may not be aliens. 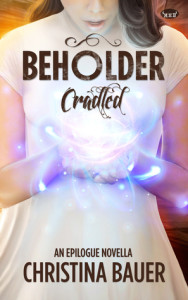 “Has romance, adventure, and lots of magical encounters! It definitely satisfied my craving for something exciting!” – Cloud 9 Books

Finally, Elea and Rowan are settling in to their new lives. Trouble is, Rowan is spending a lot of time cleaning up messes from his childhood. And considering the nightmare that was his mother, those are some ugly messes indeed. In fact, the experience is enough to make Rowan vow that he never wants children of his own.

“A riveting story with action, love and vengeance…A fantastic read.” – The Not So Public Library

Excerpt from Moonlight and Midtown

“That’s why packs have Alphas,” says Knox. “You need to set her loose, and then, let her attack me.”

Every inch of my body goes on alert. “Attack you? Why?”

“Your wolf has been through a lot. Ritual fighting is how wolves work out their place in the pack. Your wolf needs a firm hand.”

“I’m not talking about physical power here. I’m talking magic. My power is Alpha energy, but you’ve got your own magic. Once I subdue your wolf, I think you’ll get the idea.”

“Yes. Release your wolf and attack me. Now.”

I hug my elbows. “I’m not sure. If I’m patient, my inner wolf might just calm down on her own.”

“That’s not how wolves work, even when they aren’t of the magical variety. And a werewolf? Our animals are far more intense. I’m your Alpha, and if I let this go on for one more minute, I’m putting you at risk.”

Something in his tone sets my nerves on edge. “Meaning?”

I suck in a shaky breath. “She wouldn’t.”

My wolf’s voice sounds in my head. “We will run! I demand we shift NOW!”

That manic tone to her voice is now higher than ever before. Every inch of my body trembles with the urge to shift. I reply to my wolf in my mind.

“Didn’t you hear what Knox said?” Normally, my wolf can’t help but listen in on most of my conversations. “Our mate thinks you’re going feral.”

“Mate?” The manic tone to her voice hikes up an octave. “We have no mate. All we have is the need to run.”

A chill runs up my spine. “You don’t remember our mate?”

My blood chills. No matter what happens, my wolf always knows her mate. In fact, my usual complaint is that she won’t shut up about him.

This is really happening. My wolf is going feral.

All of a sudden, it’s like I can’t pull in enough air. “You’re right. My inner wolf is losing her mind.”

“Hey, I won’t let that happen.” Knox rests his hands on my shoulders. “Breathe, Bry.”

It takes serious concentration, but I slow my racing pulse a little. “Okay.”

“Now, you need to set your wolf loose and trust me. Can you do that, yeah?”

“Good.” Knox pulls off his dress shirt over his head and tosses it aside. “Set her loose.”

Normally, the urge to shift is a constant tug of war between me and my wolf. Most times, all it takes is for me to stop fighting the urge to shift. After that, I turn furry. So that’s what I do now—I drop my guard and let my wolf take over. 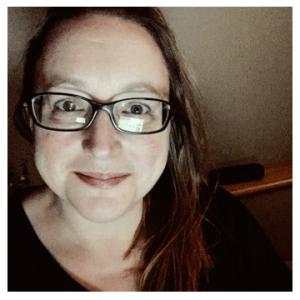 Christina Bauer thinks that fantasy books are like bacon: they just make life better. All of which is why she writes romance novels that feature demons, dragons, wizards, witches, elves, elementals, and a bunch of random stuff that she brainstorms while riding the Boston T. Oh, and she includes lots of humor and kick-ass chicks, too.

Christina graduated from Syracuse University’s Newhouse School with BA’s in English along with Television, Radio, and Film Production. She lives in Newton, MA with her husband, son, and semi-insane golden retriever, Ruby.

Be the first to know about new releases from Christina by signing up for her newsletter: http://tinyurl.com/CBupdates

Stalk Christina on Social Media – She Loves It! 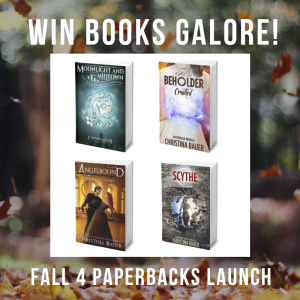