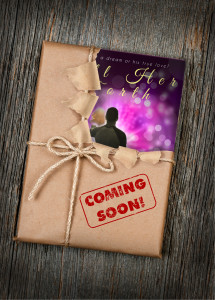 Call Her Forth is in Beta mode – as in I’m getting some reader feedback to see if the story works. (If you’re interested in becoming a beta reader, just contact me and tell me so!) But I wanted to give you a sneak peek at the new and improved model, so I’m posting the opening scene here. Enjoy! (And don’t forget to share. 😀 )

“Dude!” Jason slapped Trent on the back, same as he did every day since the two met. “A few more hours until it’s your birthday! The big two-eight. I was thinking, this year you should go scuba diving. Or maybe you should get a killer tan. Or you could . . .” Jason trailed off.

Trent raked his hand through his tousled hair, his swivel chair squeaking in time with his bouncing leg. Keyboards clacked and the receptionist yammered away on the phone. It was hard to believe he’d been working at Phil-in-the-Blank, a data entry company, for four years already.

Trent sighed. “I just can’t shake the feeling that I’m spinning my wheels. I’ve been over it a hundred times, but I can’t figure out what goal I want to set for this year—” Trent arched a brow at Jason, whose mouth was open, unformed words on the tip of his tongue. “—And no, your suggestions aren’t helping. I’m not sure anything can top what I’ve already done. Remember the year I went skydiving?”

“Dude, that rocked!” Jason said, singing the last word. “That landing was sick. So glad I got it on video; it’ll make for some great blackmail if I ever need it. Or how about the year I taught you to surf?”

Trent laughed. “That was incredible, though I think I spent more time ducking the waves than surfing them.”

Jason grinned from ear to ear. “And then there was the year you went bungee jumping off that bridge.”

“I think that scared me more than skydiving.”

“Maybe you should pull a repeat?”

“Nah. Once is enough.” Trent scratched his chin. “Maybe I shouldn’t make a goal this year. It’s not like I need to anymore.”

“Or maybe it’s time to start dating again. I’m sure that house you bought last year is feeling mighty empty.”

Trent rolled his eyes. Jason had been jabbing at his single status for a while now. He didn’t want to admit it, but Trent was starting to feel that marriage itch. He just didn’t want to end up with another Angela.

Jason leaned forward, shaking his blond shaggy hair out of his face, only to have it slide right back into place. “You’re not still hung up on that heartless harpy, are you?”

“What? No! And you shouldn’t call her that.”

Trent cracked a rueful smile. “No. Because it’s not nice.”

“Whatever. She broke you and I had to pick up the pieces.”

It had been years since the break up. He’d been waiting for Angela to get her bachelor’s before proposing, but when she decided that she wanted to finish college on the opposite end of the country—without him—she took a chunk of his heart with her. He never saw it coming. No woman had caught his attention since. The yearly goals started as a way to get her out of his head, but ended up birthing a new tradition.

“There’s this new girl at work today.” Jason wiggled his eyebrows, a wicked grin on his face. “Who knows? Maybe she’s your dream girl. You should invite her to your birthday par-tay. No better way to catch the eye of a chick than with a little strutting.” Jason jut his chin out and flapped his elbows, eliciting laughter.

Trent grimaced. “I don’t know. You know how it goes. There’s always one thing missing . . .”

“Smart, sexy, or single,” the two said together, chuckling.

Jason sobered and sidled back into his cubicle, grabbing some folders. Trent swiveled his chair. Will glared from across the floor, the eagle in his nest, keeping a watchful eye out for the weak and unproductive.

Trent turned back and began adjusting papers, fingers grazing over the rack of folders. It didn’t take much to stay off Will’s radar; keep busy and work efficiently, two things Trent was finding more and more difficult to do these days. Will had installed software to measure the workload each employee was covering. The added pressure to perform seemed to have the opposite effect on Trent. But he couldn’t afford to lose his job. He had a mortgage to pay.

The clack of heels approaching caught his ear. He turned a little to see who the new girl was. A slim, curvy brunette strutted by, the three-inch strappy black heels drumming the fanciest beat the linoleum flooring had ever played. A sapphire stone hung from a delicate gold necklace, resting on cleavage that peeked from a button-up shirt unbuttoned one too many. He reddened when she smiled at him, and he turned to stare at the computer screen.

After the sound receded, Jason’s head popped over the top of the cubicle wall. “Dude, did you see her? That’s the new girl. But you’re probably right. I’m sure there’s something horribly wrong with her.” Jason pouted his lip. “I should sacrifice myself and ask her out.” Jason grinned as he sunk behind the wall.

Trent huffed out a forgotten breath. “Not so fast,” Trent whispered loudly, leaning back in his chair. “If she turns out to be a winner, I think you should let me have the first chance. It’s my birthday, you know.”

Jason snorted, the sounds of his keyboard joining the buzz on the floor. Maybe finding a girlfriend this year wasn’t as absurd as it first sounded.