This book might not be out yet, but I’ve gotten a glimpse of some of the stories, and I have to say, it’s purrrr-fect. 😉

And, there’s a giveaway and note from one of the authors, too, so make sure you read all the way to the bottom so you don’t miss any of the goodies! 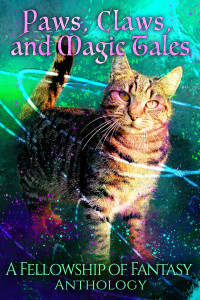 A Fellowship of Fantasy Anthology

There’s just something magical about cats.

Fierce hunters content to rest upon our sofas. Sweet friends but stubbornly independent. Fluffy little murder balls with jellybean toes and razor-sharp claws. It’s easier to answer what cats aren’t than what they are.

In this purr-fect collection, awesome authors pounce upon the challenge of the mysterious cat like the elusive little red dot it is. Curl up with sixteen stories all featuring our furry, frisky, fabulous feline friends. Inside, you’ll find adorable house cats, majestic big cats, and imperious cat-dragons. You’ll meet cats who are their owners’ protectors, who help them find true love, and who tackle the challenges of caring for their clumsy human companions in hilarious, heartwarming, and harrowing ways.

This fifth anthology from the Fellowship of Fantasy features new and returning authors, dedicated to giving you the best in cat-related fantasy fiction.

More about the Stories Inside Paws, Claws, and Magic Tales

The Witching Hour by Savannah Jezowski

As shadows encroach on the city of Lite, one cat stands between humanity and the hounds of darkness. Will true love save the day?

Two kitlings. One tail. A mother’s sacrifice and a brother’s betrayal. Who will survive the Siamese curse?

When a jingly bell goes missing, there’s only one supercat to solve this crime—the mysterious Black Knight.

How to Handle a Dragon, Feline Edition: on a volcanic shore, the accidental appearance of a local fire-guardian has unusual consequences for a street cat.

The Magic of Catnip by A.J. Bakke

An impulse purchase of catnip leads to unexpected shenanigans.

The Secret Treasons of the World by J. L. Rowan

When Braelin stumbles upon an outlawed Guardian, she must choose between his safety and her own—and the cost may be more than she can bear.

The Poor Miller and the Cat by Lelia Rose Foreman

When a poor miller rescues a cat, it promises to make him a wealthy man. But what is true wealth?

Alex the Cat and Alex the Prince by Ace G. Pilkington

The prince’s parents are telling him he has to marry for money, and his cat says it could cost him his life.

Get a cat they said. It’ll be fun, they said. No one mentioned the portals to a mysterious realm opening up in Kara’s bathroom.

The Honorable Retrieval of Miss Sunbeam Honeydew by Pamela Sharp

When two princesses of the realm claim the same cat, how far will their loyal retainers go to see that each princess gets her way?

Walk under ladders. October the 13th. A black cat. Perhaps the only way to bring two lovers together is through the worst luck.

The Cat-Dragon and the Unicorn by Janeen Ippolito

Ademis the cat-dragon only wants his freedom but must graciously help a scared unicorn girl who should be glad of his benevolent assistance.

Kendall knows he is destined for great things. The problem is, the Fates — if they even exist — don’t seem to agree.

A ring is lost. A friendship is ruined. A cadre of cats is on the case!

Loki, a regular old Siamese cat, finds Death looming to take his human. Bargain as much as you want, but remember: Death always collects.

When an immigrant violinist’s music enchants a Cait Sidhe, she’s entangled in the secret world of the New York Fae.

A Note From H.L. Burke 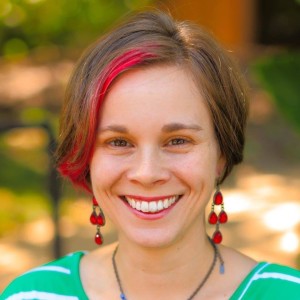 Cats are sneaky critters. You’ve seen those ninja cat videos where the cat only moves when you’re not looking? It’s like that.

I have a huge, orange tabby named Bruce Wayne. He’s big and bulky, but as far as stealth goes, he still manages to live up to his namesake. I don’t know how many times I’ve walked into a room, no Bruce. Turn around to pick something up, turn back, nearly jump out of my skin because SUDDENLY BRUCE! Usually right in my face, wondering if I have anything to eat.

Bruce’s appearing act is kind of how he ended up with our family in the first place. One evening he was just on our doorstep, looking for something to eat and someone to pet him. A local pet-finder group couldn’t locate his owners. He wasn’t micro-chipped, and he seemed to really like us.

Basically Bruce chose us and then magically manifested himself into our lives. His ability to appear and his confidence in knowing WE were his family led me to speculate on a cat who could appear and disappear at will, and what if that cat set his sights on a particular owner, a owner who might not be prepared to handle the awesome that is a portaling magic cat.

And out of that came Whisker Width, my short story for the Paws Claws, and Magic Tales 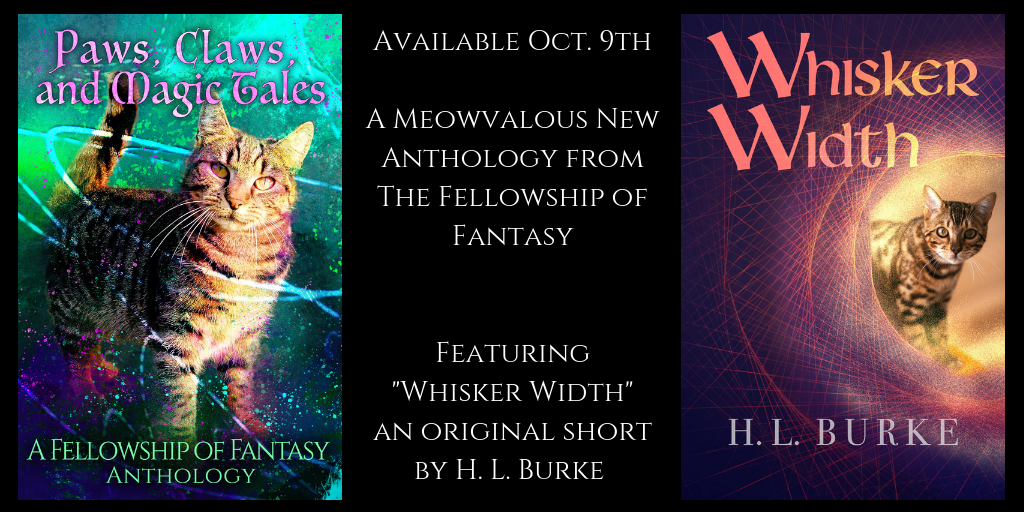