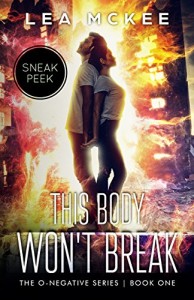 I had a feeling when I began reading this, that I was going to regret that it was just a preview – a part of the first book. I was right.

Joanna has grown up as an orphan in the hands of the state. She has lived a life separate from the rest of the population, learning, growing, and staying safe from Ten, the virus that has threatened to eradicate humankind.

Now on the verge of turning 18, she’ll transfer to a facility to help determine her function in the society of survivors. But a warning from the closest thing she has to a friend–“They’re raising you like cattle…”–has Joanna nervous. And she’s not the only one suspicious. In the new facility, can Joanna trust the familiar stranger tasked with guarding them, or will she decide that ignorance is bliss?

This was an engrossing read, with vivid characters and a fast-paced style that had me turning the pages. Definitely one on my to-read list so I can get the rest of the story, though I confess I’m waiting for the next book in the series to come out so I don’t get stuck with another cliff-hanger. 😉

**This book was clean.