by Anna Katmore
My rating: 5 of 5 stars 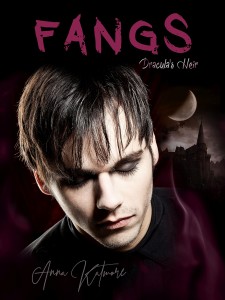 Being a vampire might be the greatest thing in the world… or the worst.

19-year-old (forever) Quentin has been spinning his wheels since the death of his parents led to his subsequent change at the hands of great, great, great (something-or-other) Uncle Vladimir Dracula. That’s right, the infamous Count Dracula.

So when Uncle Vlad finally has enough, he throws Quentin out on his proverbial butt, dropping him off in his old castle in Transylvania. Which has nothing — no electricity, no WiFi, no indoor plumbing.

Quentin’s not sure if she’ll be his downfall or salvation when cookie-scented Abby comes to the castle uninvited. And for some reason, she keeps coming back. She smells so good, and he’d love to take a bite — if he could just figure out how to do it without her sending an angry mob after him.

Because the truth is, he’s stuck, thanks to some old magic guarding the castle and his inability to tap into his supposed vampire powers. If he doesn’t get a bite soon, he’s not sure what will happen to him.

This was a surprisingly sweet romance, wrapped in a dark, angsty, vampire coming of age story. And the official description (below) had me intrigued, it was perhaps a bit misleading. I kinda expected there to be more humor to this, and while it had snark, it wasn’t so much laugh-out-loud funny. Which worked, in the end. Just not quite what I was expecting.

But to be honest, I think it was the romance that really put this one over the edge of “I’m not so sure,” to “Yeah, that was worth it”. I worried that because of the language, the romance would get a little more graphic. But despite having a certain warmth to it, it wasn’t as hot and heavy as I expected. Thankfully, it was perfectly delicious. Like a cookie. 😉

If you like your vampire bad boys snarky and edgy, this book is definitely for you. The characters were believable (even if Abby was a bit of a nervous nelly and didn’t quite smack of the British flavor her background implied), the action kept you guessing (yeah, I might need a little more info on Grandma and her mysterious cellar at some point), and the romance had you rooting for the couple the entire time.

**Fair warning: As far as language goes, there was plenty of swearing, and more than a handful of f-bombs. But the romance was surprisingly sweet, with no onscreen sex.**

Note: If you stopped by during the cover reveal tour for Fangs, you probably saw the below, but if you missed it, here it is again. 😀 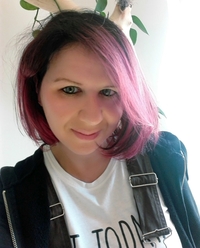