This next book seems a little dark and creepy, but in a good way. 😉

Check it out, and don’t forget to read all the way through so you don’t miss any of the goodies! 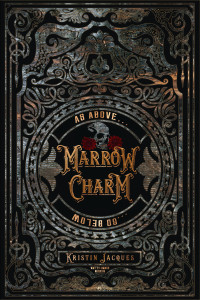 ‘In his pursuit of the occult, the Third Reich opened the Gate to a realm of magic and brought the world to ruin. The Gate was eventually closed, but They were already in our world and They were hungry.’
-The Lost History, Library of Avergard

Azure ‘Azzy’ Brimvine lives in a world decimated by magic, where humans have retreated underground from the overwhelming dangers of the surface. But Below is no safer than Above.

Magic borne plagues continue to eat away at the remaining human cities, a sickness that doesn’t merely kill, but creates aberrations from the stricken: people twisted by magic into something dark, dangerous, and powerful. It is an existence of fear and constant dread. When Azzy’s brother, Armin, is infected and cast out into the Above, she sets out after him, determined to be there for him no matter what he becomes.

The world Above is full of monsters, both wild and cunning, some more human than Azzy was led to believe. Armin is captured and bound for the Auction block of Avergard, a ruthless city of inhuman lords and twisted creatures. To reach him, Azzy must brave the perils of the Above and the chaotic life forms created by the Gate. To reach him, she must find allies and forge new bonds in this broken world.

And Azzy must reach him, before Armin’s new power is used to open the Gate once more. 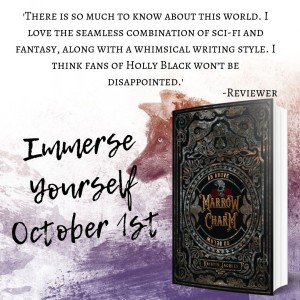 Azzy could count on one hand the number of times she’d ventured to the Above. Each time left her breathless. Stars sparked like trapped gems in a swirling mass of velvety purple and deep blue. Their light reflected off the white blanketing the ground, revealing snow, chips of diamond that covered every inch of the land. She rose to her feet, laughing as she spun, head flung back to the heavens.

The stars felt physically close, as if she could reach up and skim her fingers against the underbelly of that endless velvet dark. Her mama told her stories of how people once rode through the sky on metal wings. She wondered if they could touch the stars. Azzy stopped her spinning abruptly as she thought of her mother. Her reason for risking this little excursion weighed on her anew, draining away her elation. Time to get to work.

The moon hung low and full, either rising or setting over the horizon, she couldn’t be sure. The solitary howl of some animal sounded in the distance, low and mournful and a firm reminder to be swift with her task. If the tunnels were dangerous, the Above was worse by a hundredfold. “Grab anything green, grab any plants you can find”—those were her goals.

Azzy unhooked the scraper blade strapped to her leg and knelt to peel the moss and lichen clinging to the rocks. “Moss for rashes, lichen to strengthen the body’s defenses.” She continued her mental recitation as she wrapped each individual sample in separating cloth. The necessity of speed and meticulous care sent a tremor through her arms. Biting the inside of her cheek, she ripped the bark from the surrounding trees. Strip, wrap, strip, wrap. She could hear the familiar lecture on cross-contamination droning on in her head, steadying her movements. This was too important to muck up. Azzy knelt and scraped back the snow to dig out the dried shoots of sleeping plants, anything and everything she could think of to restock the Apothecary’s supplies. Someone had to; the Foragers had been gone nearly two months. Their supplies were perilously low. She couldn’t procure the more exotic ingredients to refill all that had run out but having nothing on hand was a dangerous position for an apothecary, especially after her brother’s episode last night…

Another howl cut through the air, much closer than before, choked at the end. Azzy looked up, staring through the dark columns of snow-covered trees. A high-pitched whine emanated from within, filled with pain and fear. The sound stroked her skin like the point of a blade, made the hair rise on her arms. Exchanging the scraper for her pickaxe, she moved forward, scanning her surroundings for the danger.

A rough-barked tree snagged on her clothing.

Azzy looked down, puzzled by the translucent threads trailing from her sleeve, catching on the bark. She pulled away. The threads went taut. The bark ripped away, so suddenly that Azzy rocked on her heels. She froze, her breath caught in her throat, following the threads to denser strands of gauzy white that laced through the higher branches. Not threads—web. The sparse canopy of trees was interconnected with swaths of webs, twisting in the wind with a soft clicking sound. They were entangled with bones, hung like macabre wind chimes. Broken skulls leered down at her.

She swallowed hard. Screams were for fools and food; Azzy refused to be either. Of course, she was a fool for blithely wandering into a winnowrook’s web. A grotesque melding of crow and spider far larger than either, winnowrooks were an all too common predator. Every time she ventured to the Above, their infestation of the area seemed to spread. but she wasn’t caught, not yet. She took a step back. Movement thrashed in the corner of her eye. She bit her tongue bloody to keep from crying out. A pitiful whine reached her ears, wrapping around her better judgement as her traitorous gaze followed the sound to its source.

A massive wolf dangled a foot off the ground from the thick gray cords, his twisted position giving her an eyeful of his anatomy. He wrenched against the web, painting it red. The threads were so tight around his body they cut through the thick pelt of mottled black and gray fur. He was killing himself. The more he fought, the tighter the web would constrict until it cut off his air or he bled to death. He jerked into a halting spin, half facing her. His pale yellow eyes were sightless and wild, so panicked he didn’t see her standing there. 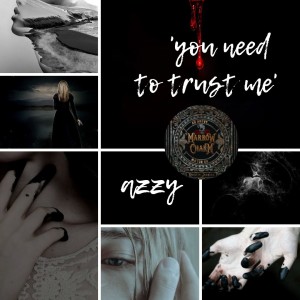 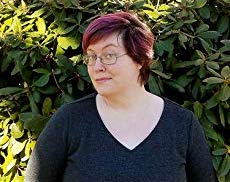 Kristin Jacques is an author from small town New England. She grew up in the sticks, surrounded by river wildlife and various swamp inhabitants. Somehow she managed to keep all her toes, despite a run in with a snapper or two.

She lives with her husband and sons in another small New England town. She is mighty attached to them. When not writing, she is likely reading, watching a terrific B-Horror flick, or further spoiling the family cats. Sometimes she has blue hair.