Today we get a little insight into Raquel Byrnes’s book, The Tremblers 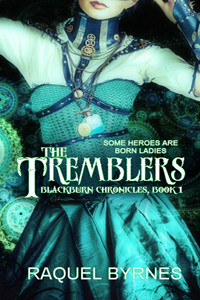 “A soldier leaned out the window, taking aim at Charlotte. A frisson of energy pulsed from the weapon, barely missing her. She screamed, flailing.

Ashton flipped the rocket ignition on the power cycle and the force of the thrust slammed him against the seat as he shot skyward toward the roof. Pulling his tracer gun, he fired blindly at the building. The soldier dove for the floor.”

Creating the weapons for my YA Steampunk novel, The Tremblers

took me on a fascinating path. The invention of destructive devices was vexing and addicting all at once.

Weapons of light — Tracer Guns are the weapon of choice for the soldiers of the Peaceful Union. Powerful blasters that syphon the glowing purple energy from the massive Tesla Domes caging the city-states are feared by the average citizen. Constantly recalibrating to the dome’s pulse, they are outlawed to everyone but the soldiers of the government.

Charlotte is a tinkerer and inventor. The daughter of a renowned soldier and chemist, her weapons needed finesse. I designed the metal spheres of her Shrieking Violet grenade to cluster together like a flower. Its shrill screech disables her enemies while a curtain of magenta gas shields her escape.

The outlaws and Lawmen of Outer City favor guns and pistols of the old world. Sheriff Sebastian Riley’s revolver helped him to rise to power among the pirates and pioneers of the sky settlement.

Another daunting tool was the Lightning Stick, capable of lashing whips of energy. Used by the ruthless Lawmen of the floating ports, Charlotte learns of its devastating effects while trying to flee with Ashton.

However, it is the power and might of the Peaceful Union Aero Squad that strikes fear into the heart of every citizen. Their searing lamps and concussion bombs send rioters scrambling. Creating airship battles and designing the infamous rebel ship, The Stygian, was great fun! Myself the daughter of a military man, I grew up visiting airshows and sitting at the controls of massive machines of war. I wanted to bring that fascination and awe to the Blackburn Chronicles.

If you love mechanica, mayhem, and monsters, then check out The Tremblers

, available now wherever books are sold. 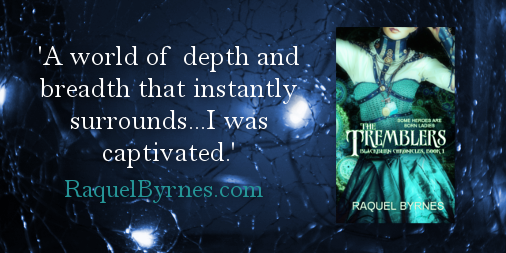