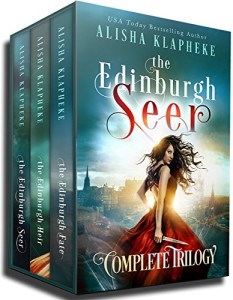 Finally got around to reading the whole the boxset!

I started this series a while back, picking up book 1 because of that gorgeous cover. And I loved that it featured a fantasy food element–in this case candies that could imbue the eater with strength or make them float or whatever. Very cool.

Not to mention the setting, which is set in a modern Edinburgh, Scotland… if England still had a reigning king and the United States were merely the Colonies. It sometimes has an old-fashioned feel to it, but there’s the use of cell phones and cars that makes this modern.

Having read book 1 so long ago, it took me a little to get back into the story. There are a lot of things and people at play.

Once I got back into the story, I enjoyed it. It’s a smooth read with some really unique elements and I kept wondering how in the world this was going to end.

Personally, though, I found it difficult to fully delve into the lives of the characters. This made some of the stakes a little less impactful, and the romance between the two main characters a little lack-luster, despite their obvious attraction to each other (especially at odd moments, like when running for their lives). And to be honest, the ending almost felt anti-climatic in some ways.

Overall, a great read, and entertaining, though. If you like innovation in your fantasy, and series you can binge-read, this trilogy is a great way to go.

**Despite the steaminess of the love interests, the author managed to keep this clean. I don’t recall any swearing, but if there was, it was minimal and mild.