Well, it’s long overdue (and probably a bit tainted by that gif 😛 ), but I wanted to thank everyone who supported the release of Marked, part 4 of Running Toward Illumia.

I’m excited to say the re-release of Running Toward Illumia is coming – this time with all 4 parts in one book, and a print version for all of you who love that new book smell.

(EDIT: You can get Running Toward Illumia

To celebrate, I wanted to feature all the authors who helped me get the word out.

Click the headings to read the post they shared (10 Reasons Not to Visit Illumia, as told by Astrea), and check out their book covers and short blurbs to learn more about these incredible authors.

What’s a Fae Warrior to do when the only woman he has ever loved, chose his best friend instead of him?

Even if you haven’t read the original Eclipse Series, you can jump in here with Lancer and The Eclipse of Time. This is a new series starring a character favorite who will find love in the most unbelievable way.

Read it to the end where you will find a BONUS story! Eclipse of the Warrior is included at no additional charge. Enjoy!

The McKinney family is embarking on a new adventure, moving from Philadelphia to a suburb in the Midwest.

But a decade-old family secret threatens the tentative peace the trio manage to eke out in their new home. Within days all three are tortured by visions they can’t fully explain.

With the help of Karen, the girl next door, Matthew tries to piece together the history of his new address. Can he save his family and end the haunting at 1273 Marigold Lane?

Lenore Porter’s life had not gone as she planned.

The marriage she put her heart and soul into failed.

The man she sacrificed so much for abandoned her.

But Lennie refused to be broken.

During a short, final inspection, her former home turns into a confrontation with ghosts from the past, and decisions and events Lennie felt she’d dealt with and moved on from.

Free, a Novella, is a clean read recounting one woman’s determination to not be broken by life or lose her identity.

I am Lacey Fielding and I have a score to settle.

Eight years ago I learned the truth behind my father’s death.

And it wasn’t pretty.

I mean, revenge was inevitable.

But I was about to confess when my plan took an unexpected, yet delightfully delicious turn…

Are we to be forever defined by our bad choices, or is there hope for redemption?

Two teenagers who connect as pen-pals in the 1970’s have their future together all mapped out, until that pesky thing called life, gets in the way. Follow the separate adventures of Teresa Mercado and Nicholas Stevenson as they each search for that most elusive of dreams – happiness!

A love story that spans two continents and a generation. A beautiful and moving tale of two soul-mates trying to rediscover the joys of their youth.

A convicted murderer on Death Row is counting down the hours before his execution at dawn by lethal injection.

As he muses over his impending fate, characters and events from his past emerge from his memory to help illuminate the last few hours of his life.

The Mentera, an ancient insectoid race with horrible secrets and even more chilling technology, encounter the Zikri, tentacled warlord pirates who roam the galaxy, capturing ships and enslaving their occupants.

When a simple recon mission goes bad, Lieutenant Miko Almstran finds himself the victim of a Zikri heist. Fused with an alien lifeform, he gains mutant powers after being thrust into the bleak future by a freak warp drive accident in the heat of a space battle.

Is it possible for one timelost wanderer, perhaps the last hope in the face of a rising alien menace, to save the human colonies from subjugation?

All Bryn ever wanted was to fit in, to be one of the respected professional thieves and never practice the magic that destroyed her mother. But her dreams crashed and cremated when she was captured on her first thieving mission. Incarcerated and paroled two months later, Bryn snatches at the chance of a new life.

But her corrupt parole officer won’t let her. He has every intention of using her magic to suit his own dark plans. She finds herself wedged between a rock and a jail cell. Doing what he wants will cost her freedom and her newfound family. If she tells on him, no one will believe her. He’s a respected supernatural corrections officer and she’s just a witch on parole.

The graveyard visible from Caleb’s bedroom window grows a little bigger each day. He sees funerals there every evening, but nobody is dying.

Misha, the strange girl who lives there with her grandfather, takes an unwanted interest in Caleb, and he can’t shake her off. But he’s sure those peculiar mourners, the same ones at each graveside every time, are forcing her into rituals against her will…

Caleb, still reeling from the death of his mother, soon finds himself deep in a world of the dead in this chilling YA horror novel; will it be too late for him to climb back out?

Georgiana Hewitt seems to have it all. She is beautiful, professionally successful and financially secure. But her love life is pathetic.

When her new boss, Jackson, accompanies her on a work trip, she fights her overwhelming attraction to him. She finally gives in, sharing several perfect nights with him, knowing it can only be a fling.

Two months later, Georgiana is shocked to realize that she is pregnant, and heartbroken when she miscarries before she can tell Jack. Weeks later, when Jack finds out about the pregnancy, his rage and hurt drive him away.

Can he forgive her, and can they have a future together?

Thanks for checking out these awesome authors!

And if you didn’t read the article as posted on one of their sites (you really should), here it is again. 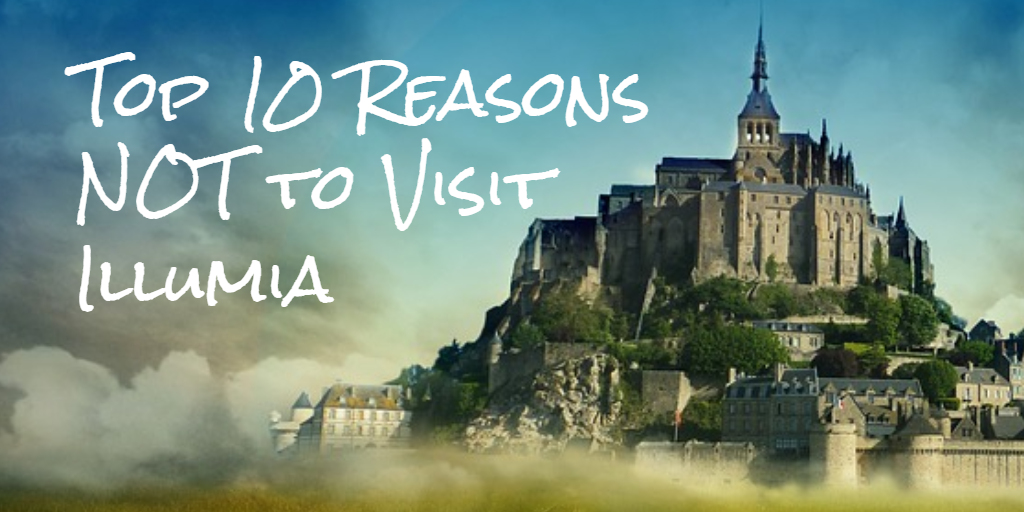 My latest story is Running Toward Illumia, Astrea’s tale of finding herself while running from the one thing she wants most: To find her sense of belonging.

Astrea’s lived in the Mist all her life, and she loves it there. In fact, she’d do just about anything to feel like she fits in with her Rudan people, even hunt a unicorn to feed her starving tribe.

Illumia is the first city beyond the Mist, just past the Dragon Range. Astrea’s come up with 10 reasons to never go to Illumia. I’ll let her tell you more.

Top 10 Reasons NOT to Travel to Illumia

Who needs sunshine? I’m a Mist girl. Great for concealing movement, comfortable like an old blanket, and you never have to worry about dry skin.

That’s why this tribe is here, despite being sent to the fog to die. And why we call ourselves the Rudan, rather than the Banned.

Wish my hair was redder. And I could use a few more freckles. But I’m one of the Rudan, I swear. I’d be dead if I wasn’t.

Fog weeds out the weak. And if the fog doesn’t, the Lynx, ogres, or Rudan will. Illumians live the easy life. They have no reason to be strong.

The Rudan take in anyone who can survive the fog. Illumians kicked us out (or at least my parents, but children of the Banned are no less welcome).

I know all five of my council members, and they earned their spot. Like Seneca, first huntress—my mentor. Illumians probably have no idea who runs their council.

Even if you can navigate the fog, streams filled with flesh-eating fish, and ogre-infested swamps, there’s the dragon range. There’s one pass, guarded by Illumians. The rest is mountain. Treacherous, dragon-housing mountains. No other way around it. Going to Illumia is a fool’s errand.

If you think getting one person into Illumia is hard, try five. Two brothers, plus Mamaa and Pawpaw.

Course, the whole tribe’s basically family. I’d want to take them all.

Except maybe Mavin. He’s a jerk. (Kidding. Sort of.)

Going to Illumia is a one-way trip. Illumians and dragons ensure that.

Do I need any other reason?

If you want to read more of Astrea’s story, you can check out this excerpt here.

Or listen to this dramatic reading here.

Or get Part 1 for free here 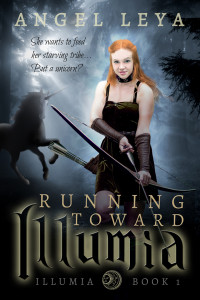