**Warning: Contains some spoilers for Shifted, Book 1 of the Siren Prophecy**

A siren prophecy, a love curse, and a devastating decision that will change the fate of shifter-kind forever.

Resuming normal life isn’t exactly an option for Myreen after finding out she’s a freak chimera and the daughter of a villainous vampire leader. But she can’t forget about that kiss she shared with dragon shifter Kol, even if he’s still acting hot one minute and cold the next.

Juliet’s love life isn’t looking so great, either, while Kenzie’s may be too hot to handle. And Leif’s feeling the heat of his subterfuge with the vampires, while Oberon is struggling to keep the school together.

Time’s ticking, the prophecy is hanging over everyone’s heads, and the fate of the Dome and all shifter-kind rests in the hands of a teenager who’s not sure she’ll ever be ready to kill her own father, no matter how terrible he might be.

If you love Harry Potter, The House of Night, and A Shade of Vampire, you’ll devour this sequel to the USA Today bestseller, Shifted.

Find out what happens next! 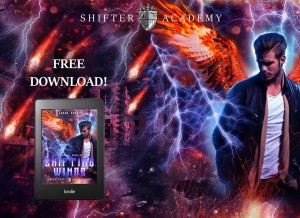