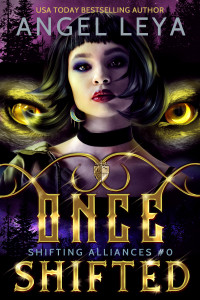 Late-bloomer Katie is just accepting her fate as a were shifter.

Wary of the security of the School for the Shifted, she opts for a trip into the wilds of Idaho where weres can make their first change in peace and under seasoned guidance.

But the leader of this group, Max, is not much older than herself. And handsome and charismatic, too.

Even better, he notices her. Not her best friend who’s there for moral support, but insecure, quiet little Katie.

As Katie begins to fall for Max, she finds herself pulled away from her best friend, her home, and finally herself.

But she marked him. He’s The One. Max is the best thing that’s ever happened to Katie.

Once Shifted is a prequel novella to Twice Bitten, a paranormal romance set in the Shifter Academy world.