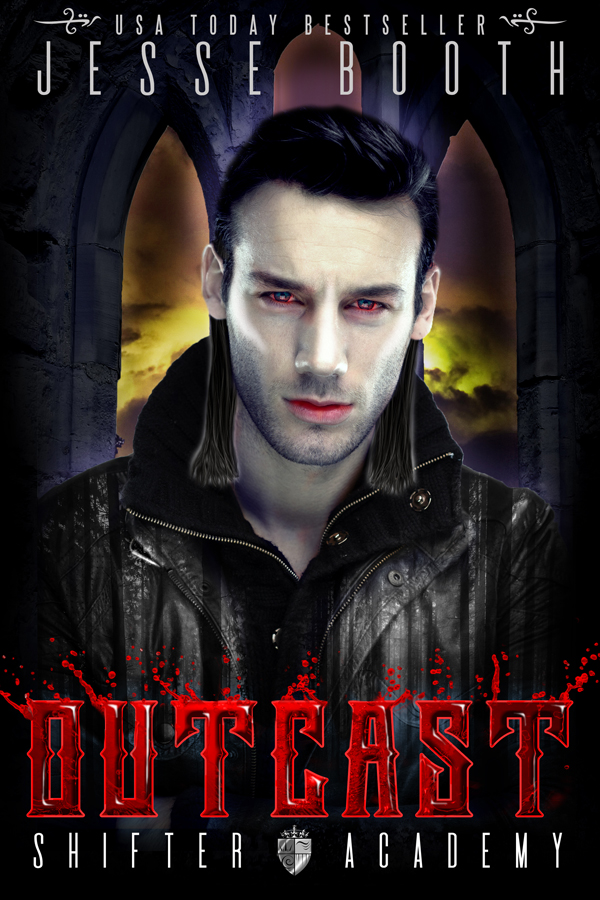 I was fortunate to have the opportunity to design the cover for Outcast, as well as beta reading the story. I think you’re going to love it!

I love Leif. He’s a bit like the Cullens (from the Twilight saga

), in that he does his best to fight his vampire nature. And like the Cullens, he has to deal with a vampire hierarchy, namely Draven and Heritage Prep. This prequel novel details Leif’s time with Draven, and what drove him away from the vampires again.

Leif Villers has been a vampire for nearly a century, and he hates what he is. Unwilling to live in the present, he falls into surfacing memories and re-experiences them — memories of Camilla and the Frost Boarding House, and of course, his beloved Gemma MacLugh who was murdered by a dragon shifter.

But the hermit vampire doesn’t know he’s being hunted, and after being rescued by the most unlikely person, he joins a school of vampires directed by a visionary leader known as Draven Denholm. Leif is motivated by Draven’s promise of discovering the way to resurrect his betrothed. But such promises come with a cost.

In an effort to bring Gemma back, will Leif forsake his past and become the very thing he abhors most? Find out in this prequel of the USA Today Bestselling Siren Prophecy Trilogy.

An excerpt from Outcast:

Holding the candle up, Gemma gasped. “Leif! You look as pale as a ghost!”

He hadn’t noticed this, and he lifted his hands in front of him to inspect his own coloring. Sure enough, his skin, once well-tanned from his labors in the orchard, was as white as milk.

“Can you not guess what my illness is after having seen me?” he said, dropping his hands in disgust.

Gemma stepped lightly to him and held the candle close to his neck to inspect the wound there.

She ran her fingers just under the marks. “A bit?” she asked, her own face going pale. “Oh no.”

Leif could see her solving the riddle, and he looked away with embarrassment.

“The vampire attacked you after you sent Beatrice away?”

Leif looked at her with confusion and shook his head. “No, my dear Gemma. Beatrice was the vampire. And now, I am one of them.”

Leif forced himself to pull away from the memory, slapping his forehead as tears streamed down his face. He couldn’t think about her, not right now. He couldn’t walk down that path.

“Stop it!” he yelled at himself, pulling at his hair.

And then the urge washed away all memories. Instinct started to take over. He licked at his teeth, searching for any hidden dregs of blood that might still be clinging to the inside of his mouth.

before the price goes up!