“The Mer didn’t always exist – at least not as we’re known now. We used to live as people of the sea, living in the water nearly as much as on land. We turned to the depths for our food, trade, and more. It was a simple but wonderful life, as some tell it. Our people kept to themselves, preferring the briny waters and marine life to outside tribes, and the sea returned our love. We fished with the dolphins, swam with the sharks, and oysters willingly gave us their pearls.

“Then everything changed.” I paused, looking at the young Mer gathered around me. Their eyes were wide, reflecting the glow of the jellyfish that danced by. It wasn’t so long ago when I sat in the audience, mesmerized by the animated retelling of our people’s history.

“As legend tells it, our tribe was very protective of the secrets we learned from our love. In order to protect these confidences, our elders passed a law that no one should find love or marriage outside of our tribe. It worked for many years, but as our trade business grew, some of the younger among us began to fall in love with the young and exotic traders that would come in. There were only a few at first, but soon a large group of our tribe had fallen in love with outsiders.”

An appreciative “oooh” went out from the small crowd, and a couple of the little mermaids giggled. A smile brushed my lips.

“The group, which called themselves the Tierramor, banded together. They fought for their right to pursue love, but the elders fought back. Though imprisoned and publicly flogged, the rebels persisted, and the uprising continued, growing in strength and number. Many sympathized with the Tierramor, much to the displeasure of the elders, and eventually the imprisoned escaped, fleeing to the outside tribes for refuge with their lovers.”

A couple of the little Mer cupped their hands over their mouths, and there were some audible gasps. I grabbed a rod I had crafted into a makeshift spear and turned on the children, garnering some nervous gulping.

My voice rose steadily as I continued the story. “Fueled by anger and fear, the elders ordered the rest of the tribe to pursue the Tierramor. Those who resisted would watch their families suffer, so all participated, including the sympathizers.” I poked the stick in the direction of some of the Mer, resulting in some squealing. A wicked smile crossed my face, and many of the Mer in the front began backing up.

“After a few days, all of the Tierramor were rounded up, along with many of their lovers. The elders forced the mutineers and their lovers into the sea, blocking their return to land.

“Their deaths were slow. The outsiders drowned first, not having the skills that our tribe had learned from birth. The rest, finally wearying of staying afloat, succumbed to the sea one by one.”

I looked from each child to the next. One visibly shuddered, and I heard some whimpering from the back.

“As the last woman began to drown, a dolphin swam by. It saw her distress and tried to save her. The dolphin’s actions angered the elders, and they threw spears at it to scare it away. One of the spears pierced the dolphin’s tail.” I threw my spear into the sand in front of the crowd, causing one of the little mermaids to scream. “It cried out in pain,” I shouted over the growing ruckus, “but it continued to try to help the drowning woman. Enraged, the elders threw more spears. One struck the dolphin’s side, while another plunged right into the woman’s heart.”

I grabbed at my chest and let my body sink to the ocean floor. I lay there until all were silent. The only sound was the swishing of the passing jellyfish. I rose up, slowly, my voice soft and low.

“Seeing the woman speared to death, the dolphin screeched. As legend tells it, the sound closely resembled that of a human. Having nothing left to live for, the dolphin gave up and died, joining the dead bodies that floated along the shore. The elders forbade the people of the tribe to bury the bodies, including that of the dolphin. They said that the rebel’s punishment wasn’t full until the sea had swallowed them whole.”

“The creatures of the sea surrounded the floating bodies, not allowing them to float away. For days, they sang to the tribespeople. There were no words to the song, but the meaning was clear: bury your dead and mourn for their loss.

I heard one of the children sob, and I had to choke back a catch in my own throat. Despite the many times I heard the story over my lifetime, the calloused actions of my ancestors always got to me.

“On the third day, the singing ceased, and the creatures parted. A man rode through their wake, carried by a shark and a dolphin. Kelp covered his body, and starfish clung to his wet hair, which shone as green and brown as the seaweed. Although none had ever laid eyes on the man, it was immediately understood that this was the King of the Sea, and fear spread through their midst.

“As the man emerged from the water, the sky darkened, and the creatures began to cry in anguish.”

I lowered my voice as I continued, attempting to sound like I imagined the Sea King would. “‘How dare you punish the sea for your own sins,’ the Sea King roared. ‘This was not a matter for the sea to settle, but by forcing your will on the waters, you have punished the depths as well. Even as she begged you to stop, you continued, ignoring her pleas. Now you will pay for your sins. You will no longer live on the land, but you will live in the briny waters that you have taken for granted. Your lives will be dedicated to repaying the ocean, and her secrets will never be yours to tell, for you will be hunted and feared by your once fellow humans. They will force you to live in seclusion, for if they find you, they will annihilate you or trap you and rip you apart.’”

“When he was finished, the Sea King jumped into the water, riding his creatures back into the sea. The sky remained dark, and the waves began rolling in with the ferocity of a great storm.

“As soon as the King disappeared from view, swallowed by the waves, the people of the tribe began falling to the ground. Tails like that of dolphins grew from their feet as their legs fused together.” I flipped my tail, sending a small wave into the crowd. “A great wail went up as the people felt the weight of their punishment, but it was too late for repentance. The sound turned into an unearthly chorus, taking on a brassy, unnatural tone. The eerie howling reached the ears of the surrounding tribes.”

As if on cue, the children began to moan and wail.

I raised my voice again to combat the lamentations. “The outsiders were eager for revenge after losing so many of their own, and they rushed into the midst of our tribe expecting war. Upon seeing our number writhing on the ground, half-fish and half-human, they were frightened. ‘What abomination is this?’ they cried.

“Filled with anger and horror, they began attacking. Many of our people were lost that day, but many escaped into the waters.

“As further punishment, we found that the sea no longer loved us, and we had to learn how to survive in this now hostile environment.”

The waters went quiet. I grabbed a clam from the seabed and held it up in front of the children. I tapped on the shell, and it opened, releasing some bubbles. Inside was a pearl, and I removed it, being careful not to trigger the shell to clamp back down.

“The sea is our home now, and though it is still full of danger, we have made our peace. This pearl is a testament to our legacy, and it must always remind us to stay hidden. Fear the humans and keep the law of the elders. This is the only way we can survive.”

I punched the pearl above my head, holding it between two fingers for all to see. The crowd erupted into applause. I watched the beaming faces as I considered my own lack of feeling. The little Mer began to disperse, some called away by their parents, and some ready to chase the next big adventure.

The legend has been told since our creation, and though I put everything into my retellings, I always feel a little hollow afterwards. The story is meant to teach little Mer the importance of following the rules. Speaking to a human is not only dangerous – it is punishable by death. Most of the Mer heed the rules and are content with our life in the water.

I, however, am not like most of the Mer.

My name is Skye, and I fear that my growing curiosity will one day drive me to a fate worse than that of my ancestors.

Make sure to check out Nina-Y to see more of her awesome photography. ALSO, sign up for the newsletter if you want a free copy of the ebook! 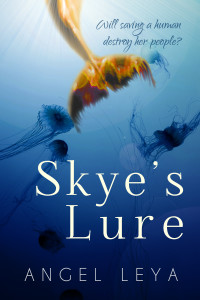