I’m generally more of a fantasy girl, but I do love the occasional romp into sci-fi. And after reading this post, I just had to share.

And because Chris is part of a giveaway, I had to break protocol and post today. Make sure you scroll all the way to the bottom for more details.

But hurry, the giveaway ends today!

Today’s guest post features Chris Turner, an author of fantasy, adventure, and science fiction. This post focuses on his latest book, The Timelost

Take it away Chris.

to Life with Booktrack 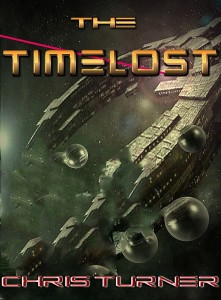 In 2014, I started sequencing original SFF to audio using the Booktrack free studio tool, and it offered up a unique, creative experience. I was amazed at how the placement of some well-crafted audio, synced by word, sentence or paragraph could make a story come alive—in the same way a soundtrack makes a movie come alive. To date, I have produced a few dozen, text-and-audio renditions of my stories, drawing on the wide variety of sound clips from the Booktrack audio library.

, my most recent production, is a gritty, dystopian foray into the macabre.

The world-building was intense, as I tried to incorporate elements of ‘galactic empire’, the theme of ‘a few struggling against many’, and extraordinary alien adversaries. I also wanted to develop the concept that an ordinary person, the pilot Miko, when plunged into a hostile, colonized, or uncolonized world with chilling advanced alien technology, could become a hero. And not just by circumstance.

, even though I had seen it after writing The Timelost

, deeply moved me and confirmed my fascination with a SciFi, man-vs-alien conflict. Human and alien genesis theories intertwine as the characters scramble to survive many bizarre and unexpected hostile encounters. The story took on overtones of fantasy horror as it gained
momentum, with elements not dissimilar to the Cthulhu mythos a la Lovecraft

and the imaginative works of R.E. Howard

. The Booktrack text-and-audio based format thrusts the reader into the terrifying unknown of planets of deep space.

A pilot stranded on a faraway planet, timelost.

Visceral alien battles, planetary wars. Can one mutant, perhaps the last hope in the face of a rising alien menace, save the human colonies from subjugation?

Get it on Booktrack: http://bit.ly/2EhEfFH
Get it on Amazon

And One More Goodie

Chris is part of an Art of the Arcane giveaway of Instafreebie, but today is the last day!

Go check it out and pick up some incredible fantasy and sci-fi books, because entertaining new worlds are just a read away.