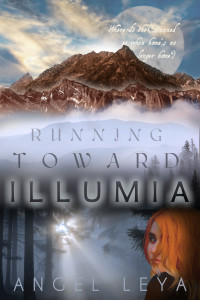 I’m learning all sorts of things all the time, and with my latest project, Running Toward Illumia (not set on the title or the cover, but it’s nice to have the reference/visual in place), I’m putting some of them to use. For instance, my main character, Astrea, and her unicorn companion, Windmane, run afoul of some ogres. The ogres capture Windmane and Astrea, and Astrea must figure out how to escape. But I was running into a road block – I had no idea what to do with the scene. It was time to dig a little deeper.

Characterization is where you learn more about the characters – what they like and dislike, what they do in their spare time, what their hobbies and interests are, etc. Characterizing the ogres breathed new life into the scene, and was a lot of fun. For instance, one of the ogres likes to braid rope. She gets the material for the rope from the hair of the victims they slaughter. Appropriately creepy for a man-eating ogre, don’t you think? Here’s a short scene I discovered when digging into their back story that I think you’ll enjoy.

Grog let go of the lynx’s throat, blood dripping off his arms onto it’s limp form. The normally elusive creature had put up a good fight, but Grog had put up a better one. He smiled, thinking of the ogre he hoped to impress with his kill.

He threw the dead cat into his bag, where he had a family of rabbits stored. Not nearly as great a gift as the lynx, the furry appetizers would hopefully be the cherry on top of an irresistible meal.

Stopping at a stream to wash off the stray blood, Grog trundled to Crok’s favorite spot, a knoll by the murky swamp. She sat there as he approached, looking as lovely as always, braiding the hair of her latest kill into one of her beautiful ropes, flies dancing over the silky strands. The mist swirled around her bald head, settling into the crevices of her ample body, as lumpy and gray as the rocks she sat on. Grog sighed, hoping his gift would be enough to win her over.

Crok looked up as she picked up the groan of Grog’s footsteps, surprisingly quiet despite the eight foot height and bulky build typical of their kind. She smiled, baring thick teeth perfect for grinding. She was incredible.

“Eh, Grog. Whatcha doin’ in my neck of the mist.” The gravelly pitch of her voice set his hearts to thrumming.

With a sudden pang of panic, Grog licked his lips. “I’d like to make a proposal.”

Crok eyed the bag, bulbous purple-gray lips pulling tight. “You sure? You know what happened to the last two ogres that came proposing.”

Grog nodded. He knew of the others, how their kills hadn’t been enough to satisfy her appetite. The marriage meat had been consumed, along with their bearers. And it was no wonder. Crok was the most desirable ogre in these parts, strong and cunning. It wasn’t her fault that her suitors hadn’t lived up to her exceptional standards. He wouldn’t be so foolish . . . at least he hoped not.

He held out the bag, still dripping pink from his haphazard wash, and Crok grabbed it, the contents swaying with a healthy heft. She opened the bag, her grim face blooming into a smile as slick as swamp muck. “Grog, you got a lynx?” she asked, pulling the stiffened cat out of the bag. The hair was matted, and the body had curled into a grotesque pose.

Grog clasped his hands behind his back, toeing a patch of moss. “There’s some rabbits in there, too. I didn’t want to disappoint.”

He held his breath, thick brows creeping upward. “So?”

Crok set down the lynx and pulled out one of the baby bunnies, tossing it in her mouth. She licked her fingers, never taking her eyes off Grog.

He smiled as he watched her eat, enjoying the musical crunch of bones on teeth.

He was a married ogre.