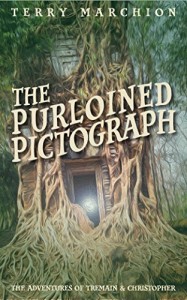 If you’ve been around for a while, you’ve probably seen The Purloined Pictograph

come up in my reviews (you can read the book’s review here). It’s actually the second in the series, the first being The Missing Yesterdays

(and you can read my review for that book here).

Today I have a treat for you! Terry has graciously shared an excerpt from The Purloined Pictograph

As a background for the story, these books take place on New Earth, a human colony started on a hospitable planet lightyears away from Earth. The people command advanced technology, and Uncle Tremain is a crazy scientist always tinkering with new ideas. Currently, they are exploring a possible site of the First Colony, a group of humans from the world ship that reverted to a more simplistic state (long story – see The Missing Yesterdays

The outbuilding turned out to be a stone tower, similar in construction to what they’d already seen, with stairs leading along the outside of the tower into the upper branches of the trees. Tremain and Christopher remained silent as they were marched. The man prodded them up the stairway, which was made up of larger stones that extended from the outer wall of the structure just enough to have room to walk single file. They climbed until they reached a doorway, just above the tree-line. The sunlight reflecting off the stones was blinding. Some branches had grown right over the wooden roof, cloaking the entire tower in foliage. Tremain opened the door, feeling the wood as he did so.

“This wood has been oiled. It’s almost perfectly preserved,” he muttered to himself as he entered. He took two steps in, stopped, then walked to the wall just to the left of the doorway. Christopher came right behind, blinking, followed by Grant, who closed the door and stood, arms crossed, barring any chance of exit.

“What is this place?” Christopher asked, still blinking as his eyes adjusted to the dim interior.

“If we could just open one of these windows,” Tremain muttered as he motioned to the array of shuttered openings in the stone wall around the perimeter of the room. Grant shook his head, which could barely be seen by the meager sunlight leaking through the cracks between the doorway and its frame.

“The missus said bring you here. Nothing else.” He resumed staring straight ahead.

“No big thinking for you, I see. Well, my intelligence-challenged friend, I’ll just make the best of it.”

Christopher’s eyes were adjusted enough that he could finally make out more detail in the room.

Dust motes, disturbed by their entering, floated in the thin rays of sunlight from the doorway and the shuttered windows. The room was musty, like it hadn’t been used in a very long time. It was definitely cluttered with various common items. Ropes, buckets and what looked like broomsticks were scattered over the floor. Wooden shelving was built into the wall and each shelf was full. Tremain made his way around the room, touching each object he could reach, muttering as he did so. Christopher stood still, waiting for his eyes to fully adjust. He didn’t want to trip again. He watched his uncle as he examined the room.

“Uncle, who is that woman, how do you know her?” Christopher asked.

“Not my finest moment, I can tell you.” He blinked as the disturbed dust swirled around him. “We knew each other in college. We were . . . an item.”

“A what?” Christopher prodded.

“Yes, well, we . . . dated for quite a while. I was smitten. I was working on my thesis and she, along with some others, were my closest friends. They all helped with the research, guided by me, of course. Aziza was so full of promise. She was one of the brightest, but she had one flaw; she had no patience.” He shook his head as he replaced another item on a shelf, twisting it firmly into place. “She didn’t want to wait for anything. She wanted results right away. Whatever she wanted, she eventually got. Eventually, she stole one of my project notebooks and tried to present the entire thing as her own.” He fell silent, thinking about the moment. “I snuck into the hall where she was giving the presentation. Oh, she was familiar enough with the material that she gave a convincing argument. At least to the board. But she wasn’t familiar enough.” He paused.

“I fed a question to the judging panel and watched as she froze as it was asked. It would have been simple enough to answer had she done the work herself. She was leafing through the notes in front of her, frantically looking for her salvation. I shouted out the page the answer was on.” He looked at the floor, tapping his temple. “My almost photographic memory, you know. I was so angry with her. She knew she was caught. I had totally humiliated her.” He looked up at Christopher, his eyes full of regret. “She was expelled immediately and I never saw her again. Until today, that is.” They were silent for a moment.

Tremain moved away and resumed looking around the room with keen interest. As Christopher followed his uncle with his gaze, he realized his eyes had finally adjusted to the dark interior.

“You know, Christopher, I think this was a storeroom.” He walked back to the first shelf and lifted a metallic platter, turning it in his hands. “They obviously learned metallurgy.” He replaced it, turning it slightly to fit it snug on the shelf. He moved on. “I wonder why they put this storeroom in a tower?” He examined a metal pitcher, dumping out some accumulated dust that had settled inside. “Fascinating, isn’t it? A glimpse into the past.” He replaced the pitcher and moved more assuredly through the room, keeping up a running commentary, picking up an item, examining then replacing it. He finally stopped when he made almost a full circuit of the room. There was a window just to his left. “I have to insist, we really could use more light. Like this!”

Quickly grabbing the shutter, he pulled it open, the hinges squeaking in protest. Bright sunlight flooded the room, reflecting and ricocheting off each shiny object Tremain had touched, finally hitting the goon squarely in the eyes. Grant gave a startled grunt of annoyance and stumbled into the room, shading his eyes and moving towards the window. As he reached the center of the room, there was a loud cracking sound. Tremain hugged the wall, Christopher aping his uncle as the floor gave way underneath the thug. With a cry of surprise, he fell through the crumbling wood, his feet tangling in some ropes, dragging them down with him. Tremain bent over to look deeper in the hole as Grant’s cry echoed. They heard a faint splash. “Never leave a genius in a cluttered room!” He yelled into the hole. Nodding, he wiped his hands together and turned to Christopher. “Now then, let’s get away from here.”

Christopher could only stare in amazement at his uncle. Tremain waved a hand.

“Simple, really. The door was treated with some sort of preservative, but I could tell right off that the floor was not. When we walked in here, I could tell by the sound that there was an empty space below this floor and it creaked and cracked as we entered. As our friend Grant outweighed me by at least a hundred pounds or so, it wasn’t safe for him to stomp around, now was it? The rest is simple physics, Christopher. Although, I can attest to offering a quick prayer to Lady Luck. Now,” he pulled his tablet from his pocket and handed it to Christopher. “I want you to use this to get back to the lab. Get hold of Senator Marcus and tell him everything. He knows all about Aziza. He’ll bring the troops!”

Christopher hesitated. “Wait, what are you going to do, Uncle?”

“I’m going to give Aziza exactly what she wants. If she wants to find this thing the Mayflower people made, I’ll make sure she finds it. But now I need you to go. Get help.” He ushered Christopher to the door.

Christopher pushed the icon on the tablet, and disappeared in the shimmering light. Tremain gave a sigh of relief that his nephew was safe, then made for the door. “Right. Now to stall for time.”

Thanks for reading this excerpt from The Purloined Pictograph

by Terry Marchion! If you’d like to get started on the series, you can get a free copy of The Missing Yesterdays here!