Check it out, and don’t forget to read to the bottom so you don’t miss any goodies. 😀 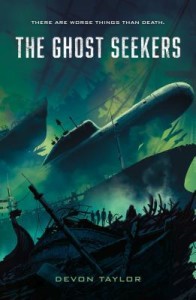 “A fantastic high-stakes adventure on a ghost ship sailing forever into eternity, where every soul is (literally) worth fighting for—what’s not to love?” —Rin Chupeco

, author of The Bone Witch and The Girl from the Well

There are worse things than death.

The Harbinger is lost, sunk to the bottom of an otherworldly sea. Every soul that ever died and was protected within its hold has been lost along with it. But at least that precious cargo is out of reach of the demon Urcena and her army of soul-devouring monsters.

The soul keepers are broken, scattered, and barely clinging to existence without their ship or any way to collect or protect the souls of the newly dead. If they are to have any hope of stopping Urcena’s horrifying plans to destroy the fragile balance between living and dead, they will first have to survive long enough to locate the ghost of one of their own, who sacrificed himself to save the rest of the crew.

Devon Taylor’s cinematic and pulse-pounding duology comes to a thunderous conclusion in The Ghost Seekers.

Excerpt from The Ghost Seekers:

“Those souls are at the bottom of the river in the afterlife. And we need to get to them.”

“Which means that the lantern will take us there,” Rhett said. “I get it. But how do we get it lit again?”

“Well, you can’t just light a match and hold it away from the wind, mate,” Basil said. “The lantern is ancient. It’s powerful. It won’t light for just anybody.”

There was a pause. The river shushed beside them, indifferent to the struggles of the dead.

Mak and Basil exchanged a glance. Judging by the way that Jon was eyeing the two of them, Rhett could tell that he was out of the loop, too.

“This is going to sound… unbelievable,” Mak said.

Mak sighed, and Basil nodded at her to go ahead.

“The only way to get this lantern lit again is to find the person who created it in the first place,” she said.

“You’ve got to be kidding me,” Jon said in exasperation.

“I really don’t think you do,” Jon shot back.

“I don’t understand any of this,” Rhett interrupted. “What’s the big deal?”

“The big deal,” Basil said, “is that the creator of the lantern was also the original captain of the Harbinger, back when it was just a lowly rowboat.”

Rhett felt his mouth drop open. He remembered his Greek mythology. He knew about Charon and the ferry across the River Styx.

When Rhett found his voice again, he said, “And this person still… exists?”

“As far as we know, yes. There’s no record of him ever being destroyed,” Mak said.

“In the literature aboard the ship, he’s referred to as ploigós ton nekrón,” Basil said.

“Navigator of the Dead,” Jon translated.

Rhett tried to let all of it sink in. The idea of a person who was as old as the Harbinger itself, who had created the ship, was more than a little daunting.

Rhett looked at Basil and said, “You probably already know what my next question is going to be, but I’ll ask it anyway. If the Navigator is still out there, how do we find him?”

Devon Taylor was born in Las Vegas, Nevada and currently lives in Pennsylvania with his wife and two daughters. His day job consists of sneaking around the house with ninja-like stealth to avoid waking up his kids.

When not writing, reading, or tediously typing out text messages with all the correct spelling and punctuation, he spends his time with his family. THE SOUL KEEPERS

is his debut novel.