Some days you run into a cover so gorgeous, you just have to check the book out.

This is one of those days.

I also wanted to mention that this is book 3 in the series — third and final — so for all of you who wait until a series is finished, now is the time to hop on board.

There’s also an insightful interview with Jesikah Sundin, so make sure you check it all out!

Book 3 of The Biodome Chronicles

“Spin the tales, Son of Eden. Weave them together. Make a reality all your own…” 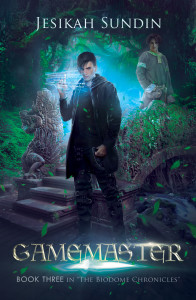 Three years ago, Fillion Nichols was poisoned, extracted from New Eden Township, and arrested for sabotage. In three days, he’ll return and ascend as majority owner of the human experiment. New Eden proclaims that he’s a man of magic­­–one who will save them from the evils of the Outside world. But, as the newly appointed Gamemaster, Fillion knows that the truth is far more terrifying than the nightmares plaguing his sleep.

In order to live, something must die.

While the biodome community buzzes with activity over the Son of Eden’s return, Leaf Watson guards a dangerous secret. A secret that forces him to trade diplomacies of peace for declarations of war. Leaf’s energy is redirected, however, when he fights to save the life of his unborn child. Chin lifted high, Willow Oak marches into the Outside to represent New Eden in her brother’s stead. She longs to unleash her hurricane winds of justice upon the world that threatens her own. Yet when she sees the man who broke her heart, their combative grief endangers all.

In different worlds coded by the same illusions of power, Fillion, Leaf, and Willow must battle ever shifting images and perceptions–a necessity if they are to reboot their generation and save the community they swore to protect.

The future meets the past in this thrilling conclusion to The Biodome Chronicles, leaving behind a final question in the quest for truth.

Are you ready to discover what is real? 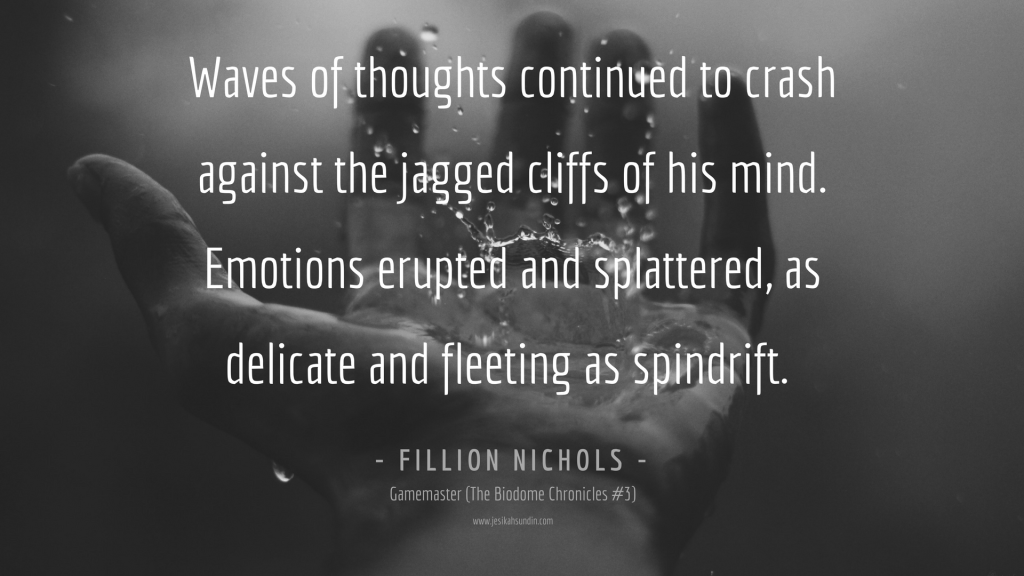 **This interview originally appeared on the History That Never Was blog. Visit the blog to read the entire interview with Jesikah Sundin by Dawn Vogel.

Dawn Vogel (DV): For those of us who might be a little bit behind on your series (*cough* me *cough*), could you give us a quick, spoiler-light synopsis of the plot up to the beginning of Gamemaster?

Each book features three point-of-views, but the focus is mainly on Fillion Nichols and his perception of reality as he falls deeper and deeper into the psychological game his father has plotted. I liken it to the frog in the pot. Where LEGACY (book 1) is tepid water, GAMEMASTER (book 3) is a full, raging boil.

So, in GAMEMASTER, Fillion must learn to spin the tales, to weave them together, to make a reality all his own. This requires him to trust his own voice and his own instincts and slowly extricate himself from the gaslighting puppet master programming his life.

In Books 1, 2, and 2.5 (novella collection), Fillion is a legacy heir for New Eden Township, the famed Mars proto-type biodome city. In Book 3, he ascends to ownership and becomes the Gamemaster.

DV: As a former LARPer, I love the level of detail that you put into the LARP components of this world. What went into your preparation for that aspect of this series?

Ooooh, I’m so glad you asked this question. In the four years I’ve been published, no one has asked me this and I’ve been dying to share. *clears throat*

Well, I created a LARP called Eco-Crafting Eden, which works similarly to the video game Civilizations, but with a post-apocalyptic eco-twist. This LARP is the backbone to New Eden Township. Eco-Crafting Eden is discussed in the series and Fillion even watches video segments in ELEMENTS (book 2). The best part? I had help from www.larping.org in creating and researching all the LARPing aspects within my story.  They even granted me permission to quote them in epigraphs preceding the chapters. Fantastic group of people! You can read an article I wrote for them back in August 2013 titled, The ‘Legacy’ of LARP: Mars and The Biodome Chronicles.

To allow my readers to feel like they, too, could join New Eden Township, I included THE CODE at the end of my book with a signature line, aka the player’s guide. And, to really amp up the LARPing experience and to pair with the psychological thriller aspects of my series, I went deep on character narrative. Not everyone’s cup of tea, but intimate characterization is as close to the role-playing experience as I could get for the reader.

DV: What was the most interesting thing you learned in doing your research for this series, or Gamemaster in particular?

Nice question. I worked with a psychologist to create my villain, who is a narcissistic psychopath. I wanted him to be realistic. I also wanted my characters to realistically react to him. In LEGACY, my villain is rather tame. Instead, he makes Fillion look like a melodramatic, punk, seventeen-year-old boy who is bored with his life and ungrateful and [fill in the blank]. It isn’t until the end that the reader sees that perhaps Fillion’s claims are not unfounded.

By the end of GAMEMASTER, the villain has shown all his colors. But it’s a complicated dance of charm, trust, spin-room conversations, projected emotions, and set-up to fail scenarios. Learning the mind of a narcissistic psychopath and how that differs from individuals with narcissistic tendencies has opened my eyes. Needless to say, writing this series has been very healing for me.

I also wanted to show that even heroes are sometimes villains and that utopia may be paradise, but even ideals we wax poetic are fraught with flaws, too.

My heroine, Willow Oak Watson, fights against a patriarchal society that punishes women for . . . everything. Her brother is a head noble and helps to manage New Eden Township, making a difficult situation worse. Although Leaf, her brother, is a good guy — gentle hearted, loving, family-centered — he’s still a product of his environment. Willow is angry, she feels betrayed, and she’s tired of being told her worth matters so little simply because she’s a woman.

I watched people in my life, women in particular. It’s amazing to me how many women are angry but are too afraid to do anything about it or feel like their efforts won’t matter in the end. Similar to how I felt at the time when I began writing this series. And, for Willow, she refuses to back down. She refuses to be seen as anything but equal to anyone within her community, regardless of gender or position.

She was a role model I needed and I’m utterly shocked by some of the reviews on Willow, and all by fellow women. They call her a brat, say that she’s crazy, or emotionally unstable, and all I hear are the words men (and other women) have told these individuals. They’ve been socialized to react this way toward angry women and to shame themselves out of their true feelings.

Honestly, when I began this series, I never in a million years thought reader reactions would be so divided on Willow. But, those who stick it out love her by end of ELEMENTS. They start to “get it” and begin to glare back at Leaf and New Eden Township. *shrugs*

DV: What project or projects are you working on next?

THE LAST FOREST KINGDOMS, another ecopunk series set in spaaaaaaace. I’m billing it as a scifi story of pagan origins with an added dash of gender-swapped Arthurian Legend elements.

Here is my concept synopsis:

Until Atruna (Rune) Pagoni crashes on the uncharted moon and restarts Avalon’s program for permanent destruction during impact. A collision prophesied by woodland sibyls, the seers hunted and killed for heralding Avalon’s whispers. An event feared by one Kingdom, its ruler willing to annihilate all other Kingdoms to protect its secret.

Sentenced by the savages who found her, Rune follows Galen, an appointed hunter, into untamed lands to track down Avalon’s computer origins. If she fails to locate the power source, everyone will die. If she refuses this quest, she’ll be executed.

On an engineered moon with biologically enhanced people time has forgotten, everything is not as it seems. Rune must survive the wilds of each Forest Kingdom and the war waged by one man to stop her, if Avalon doesn’t stop her first.

Thanks to Dawn Vogel at the History That Never Was blog for permission to repost and thanks to Jesikah Sundin for taking the time to introduce us to her work! Visit Dawn’s blog if you’d like to read the entire interview with Jesikah Sundin.

In addition to her family, she shares her home in Monroe, Washington with a red-footed tortoise and a collection of seatbelt purses. She is addicted to coffee, laughing, and Dr. Martens shoes …

Oh! And the forest is her happy place.