Today’s treat is a time travel romance. I’ll let Laura tell you more about it.

The Battle is O’er 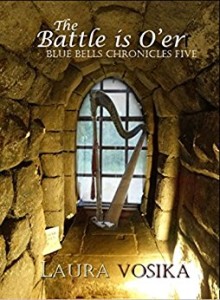 Shawn means self and Kleiner means centered, one of Shawn’s (many) ex-girlfriends proclaimed. So begin The Blue Bells Chronicles

, a tale of time travel, mysteries and miracles, romance and redemption, in an epic adventure ranging across modern and medieval Scotland against the backdrop of Scotland’s Wars of Independence in the 1300s.

Shawn has it all—wealth, fame, women—until the night Amy, his girlfriend, has enough and abandons him in an ancient tower. He wakes up in the wrong century.

Two years in medieval times, two years of fighting beside Robert the Bruce and James Douglas, two years of living with and as his medieval twin, the devout and upright Highlander Niall Campbell, working to protect those he has come to love, and perhaps mostly, his growing friendship with Niall, whom he initially despised, all work changes in Shawn.

Throughout their adventures, he and Niall seek a way to get Shawn back across time, to fulfill his desire to ask Amy’s forgiveness and finally be the man she always saw in him—succeeding at last in the middle of a fierce battle for Niall’s home, Glenmirril, against their old enemy, the MacDougalls.

Safely back in his own time, Shawn is steadily regaining all he lost—his career as a world-traveling musician, the son he feared he would never know, and finally, maybe—even Amy’s heart.

He can’t let go of the past, however, or stop agonizing over what happened to Niall and all his beloved friends, left behind in a fight for their lives. In his search for answers, hoping to find that all ended well, he learns instead of the dangers still lurking in fourteenth century Scotland: to Niall who will pay a horrible price for Shawn’s last deed, committed in Glenmirril’s tower just moments before escaping to the safety of his own time; to his own infant son, the subject of prophecy and an ancient letter predicting a fateful battle; even danger to the whole world as Simon Beaumont, known to history as the Butcher of Berwick, seeks to use his knowledge of the future to destroy it.

In this gripping conclusion to The Blue Bells Chronicles

His selfishness once cost him everything. His newfound selflessness may do the same.

Books in the series include: 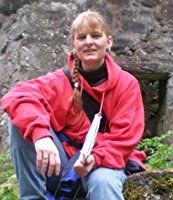 Laura is the author of the Blue Bells Chronicles, the beloved tale of time travel, mysteries and miracles, romance and redemption. In addition to the Chronicles, she has written Food and Feast

: a gastronomic historic poetic musical romp in thyme, and Go Home and Practice

She has co-authored 221 BC with Dr. Kendall Price and is working on several non-fiction books, including Theology of Music, with Dr. Chris R. Powell.

Her writing has been featured on TV, radio, and in print, and she currently hosts the radio program Books and Brews with Laura Vosika in the Twin Cities.