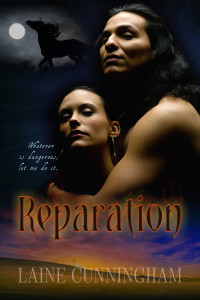 Reparation: A Novel of Love, Devotion and Danger by Laine Cunningham
My rating: 5 of 5 stars

I pretty much had to republish my review because the book has a sumptuous new cover. I may be a little partial – I actually created the cover for the author. But seriously, have you seen that beautiful couple?

In Reparation, the story follows Aiden Little Boy and Gidgee Manitou, two people drawn into a spiritual battle as much as a physical one. Gidgee Manitou is the cult leader of the Four Quarters church, whose plans to cleanse the land of past atrocities tap into the dark side. Aiden Little Boy becomes his Hunka brother – a bond that gives Aiden time to dig into the workings of the ranch and the insight to see what Gidgee Manitou is planning, though the revelation comes slowly.

At risk is all of the women in Aiden’s life – his mother, comatose and cancer-ridden for years, his sister, who’s open heart leaves her vulnerable to Manitou’s manipulation, and Rayna, the beautiful reservation herbalist who catches his eye.

I love the Native American setting, and the struggles it portrays. Ms. Cunningham doesn’t shy away from the atrocities of America’s past. The spirit elements are compelling, and bring a supernatural/fantasy element that I so enjoy.

I also wanted to mention the Heyoka – a kind of spiritual figure/clown that does everything backwards. He was an odd character in the story, but his fate made me laugh.

The writing and imagery are beautiful, and I would definitely recommend the book to adults looking for a smooth, thrilling read.

This book is a little more hardcore than most I read, but I believe the story and voice is worth it. There is some language, and there are some steamier sex scenes.

She has redone several of her covers (and several are retitled as well), so I’ll be posting those as they go live. 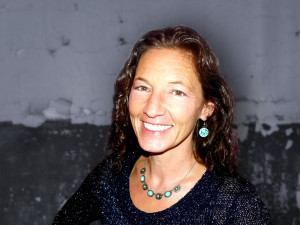 Laine then developed a new fiction voice that resulted in On a Rush of Silent Wings, a literary black comedy dealing with income inequality and the illusions we choose to believe. Currently she is developing an epic historical novel set in Europe during the scientific revolution before the Enlightenment.

Her novels include The Family Made of Dust: A Novel of Loss and Rebirth in the Australian Outback

, a sensual noir thriller, follows an FBI agent who must access the dark power of the goddess Kali to bring down two serial killers. In Reparation, a Lakota Sioux man must save a sister and his lover from a sinister peyote cult.

Laine’s goal for her fiction is to spur readers into dialog about our society and the parallels found in history. When individuals recognize how large issues build on multiple small elements, many of which were taken up by individuals just like them, they recognize that everyone can foment change.

As a publishing consultant with twenty years of experience, she has written Writing While Female or Black or Gay: Diverse Voices in Publishing