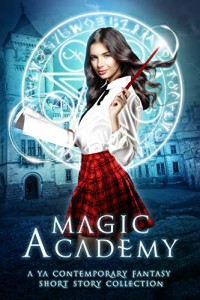 What a fun collection of short stories that introduce you to magical and fantastical schools–which are anything but boring. From Tinker Bell to dragons as teachers, witch’s spells to vampire ambitions to magical creatures, these stories are the perfect extra-curricular assignment.

Obviously, as a fellow author of the anthology, I like my own story, but I’ve picked a list of favorites from the other authors (in which I had no hand :). In no particular order:

I’ve got short descriptions of each story below, including my own, for those that are curious. This is a fun collection if you like short stories, and a few will probably leave you wanting more. And you can’t beat the price. 😉

The Hidden Forest by Megan Linski and Alicia Rades – Imogen finds a wall in the forest that she can’t get around–and it’s rendering her magic useless, too. What’s on the other side?

Dragonslayer Class 101: A Dragonslayer Academy Story by A.J. Flowers – A dragon slayer has to go back to school to prep for his latest assignment. But when his shard of Excalibur is awakened by a nosy teacher, it transports him into a new assignment, one that will test his resolve.

A Demon Born’s First Love by Ashley McLeo – Being a demon-born witch comes with plenty of stigma, which is why Iola would rather NOT go to summer classes at the witch’s school. Still, she wants to make her mom proud, and her best friend did say she saw Iola meeting a new guy…

Imdalind Academy by Rebecca Ethington – Sia is determined to not only enter the gauntlet, but win, earn the kiss of the eternal, secure her magical heritage, and attend Imdalind Academy. Too bad there are so many Drains competing this year…

Reaper: The Academy by Jen L. Grey – Christina has a strange encounter with a dying kitten, and gets a close-up with the council she so distrusts.

Izzy’s Insight by Nicole Zoltack – Izzy’s first day of witch school doesn’t go quite as expected, but her natural curiosity and determination to learn may just get her into more trouble than she realized.

Her Majesty’s Secret Fugitive by Jackie Owlett – Fire has always followed Sierra, an arsonist bent on destroying her at every turn. Not even becoming a drifter can keep her safe, but when she’s accused of being the arsonist, Sierra’s world becomes a lot more dangerous.

Merry Chris Witch by C.K. Dawn – Chris is under magic probation for using magic underage in the human world. Which means he’s going to the public supernatural school, separated from his friends his old witch school. And now it’s nearly Christmas, which is Chris’s least favorite time of year. At least, until he meets this new girl…

A New Heritage by Angel Leya – Adam is so ready for his fangs, but when daddy tells him he’ll have to go to vampire school instead, Adam is determined to forge his own way and earn his fangs without his father’s help.