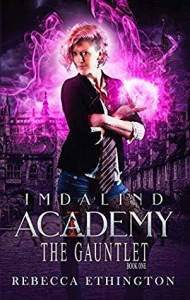 Imdalind Academy: Year One by Rebecca Ethington
My rating: 5 of 5 stars

The gauntlet has been the ticket to magic for years.

Socialite Sia is sure she’s golden. She’s been training for the gauntlet, and she has her sights firmly set on an eternal–she’s delayed running the gauntlet so she could attend the academy at the same time as him.

Undermortal (or Drain) Gemma is out to destroy those who have oppressed her and her people for ages, literally keeping the “nonmagical” in the gutters. But she has something no one could expect. Magic. Illegal, uncentered magic. And she’s more than happy to use it to destroy that stupid gauntlet they just opened up to everyone.

Eternal Rowan is fighting–fighting attending the school, fighting the magic burning inside, fighting his visions of a girl with pink hair. Too bad he keeps dreaming of her anyway, and too bad he doesn’t see what’s coming until it’s too late.

I first ran into this story in Magic Academy: A YA Contemporary Fantasy Short Story Collection and found myself hopelessly intrigued. The wold is incredibly rich, and I couldn’t help but wonder what new surprises the gauntlet held for Sia.

The book was incredible, but I couldn’t help but feeling that just as it was really getting good, it ended. Ahhhh! It took a few days to get over that.

I also felt a bit out of the loop at times, as this is part of a well-established world. It’s a new series, but it’s a spin-off from the other Imdalind stories. Which is fine, but it took a while to figure out what the heck vily and skriteks and the sort were. Not hugely distracting, but it certainly left me with a few questions that I may or may not have gone digging to answer.

Still, fantastic characters, fantastic world, and a setup that promises things are only going to get better from here!

**There is definitely language in this one, a few instances of the f-bomb, but no sex scenes.

And in case you missed it: