You might have seen my post yesterday featuring this book. Well, today I present my review! And dang, this book earned it’s five stars. And when you’re done reading this, feel free to go back to yesterday’s post for an excerpt, a book trailer, and a fabulous giveaway! 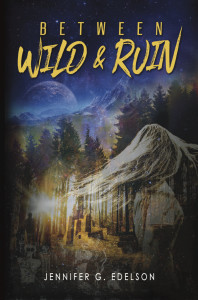 Between Wild and Ruin
by Jennifer G. Edelson
My rating: 5 of 5 stars

I was intrigued when I first saw the description and had a feeling it would be a great story. It was so much better than great.

The mysteries drag you through each page, begging you to learn more, to understand the world that Ruby is suddenly thrust into. There’s so much more going on beneath the surface, and there was one twist, in particular, that I totally didn’t see coming.

The story itself is reminiscent of Beauty and the Beast

, while the atmosphere feels distinctly Twilight

, but Between Wild and Ruin manages to transcend both tales for something uniquely compelling.

I absolutely loved this book, and am eagerly awaiting the next (fair warning, there is definitely a major cliffhanger at the end of this story, but so worth it). Excuse me while I quietly sob in the corner, waiting for more of Ruby’s story.

**There is some swearing, but not often, and no f-bombs. There are a couple of sexual situations, but no on-screen sex in this book.