If you’re a fan of The Little Mermaid (like me!), then you’ll love this next offering.

This anthology is all about the mermaid, and it’s got some exciting authors behind it.

Make sure you read through the entire post, as there are two excerpts today, plus the mermaid giveaway (previously featured on the sister boxed set, Kingdom of Sand & Wishes). 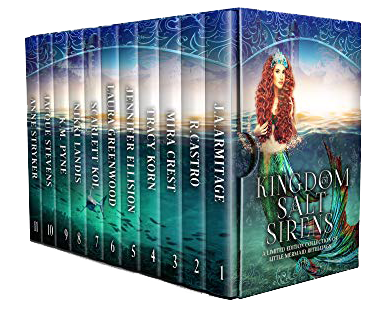 The Little Mermaid but not as you remember it…

Beneath the turbulent seas, beyond the smokey depths, lies a Kingdom that exists in your wildest imagination. A world where mermaids swim, sirens sing and shipwrecks hide mysterious creatures.
Make waves with our 11 magical retellings of the timeless classic, The Little Mermaid.

Dive into a world filled with adventure, love and magic!