Check out this book blitz, which includes an excerpt from the featured book, Death Island

Her family name tainted by her great-grandfather’s crimes of piracy, Meriden Cummings is far from the typical 18th century woman. A social outcast, she works in a carpentry shop in a small village, where the people barely tolerate unconventional behavior.

However, her life takes a turn after a gang of pirates attack her village and her blood reveals an ancient map adorned with Mayan glyphs leading to Death Island. An island legends say is ruled by the Mayan god of the underworld, Ah Puch. Her great-grandfather had sought after the island before he vanished without a trace. Now, Meriden is about to journey across the sea to understand her family history.

An Excerpt from Death Island 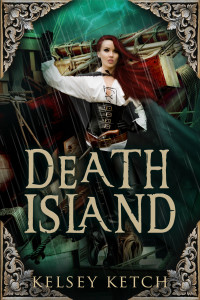 I paced the deck with the few men that stayed behind on watch. It was growing late, and Captain Connell’s curfew was quickly approaching. Soon all the crew would return to the ship, stumbling drunk and fucked out of their minds, but calmer than they had been for a while. Some reason, my body twitched in excitement. I’d been anxious since Meriden left with the last group. There was a knot in my gut the moment she stepped off the dock, and the feeling hadn’t gone away since.

I causally walked to the starboard bulwark, catching sight of the harbormaster’s window. The candle still burned as it had been long before night fall. Odd, I thought. The knot in my stomach twisted even tighter. I haven’t seen the harbormaster work his books this late into the night. I leaned against the gunwale and squinted a little, trying to focus my vision. The candle was nearly spent, and underneath the dripping wax laid what possibly could be a hand, but it was too far to tell. As I eased back, my gut squirmed like a bunch of worm snakes. I needed to be sure all was well, for Meriden’s safety and the rest of the crew.

Neglecting to ask Swan’s permission, I slipped down the main deck, across the gangway, and headed straight for the harbormaster’s office. The street was as quiet as the grave when I reached the door. I raised my hand to knock, only for the door to push open on the first tap to the solid oak. I swallowed the lump that crammed its way into my throat. This wasn’t good. I drew my working knife and stepped inside.

It felt stupid walking into the dark hallway without knowing if I might end up dead or accused of theft, but my gut told me to keep pushing forward. I turned right into the room with the burning candle still flickering inside. The office was clean and uncluttered except for the few stacks of paper on the desk. On top of which laid the harbormaster, as if he merely fallen asleep in his desk chair. My eyes refocused again at his outstretched arm. A trail of hot, liquid wax ran across the flesh of the harbormaster’s hand, which didn’t even stir the man awake. My heart pounded with adrenaline, and I pushed the man up by the shoulder.

A maroon-colored pool poured onto his books from what looked like a dagger wound to the harbormaster’s shoulder. A serious wound, but not one that should have killed. It was the discoloration of the man’s skin and the vomit around the mouth that gave me a better idea what had brought on the man’s demise. I’d seen the signs many times before from men who died in blackish waters as well as a few victims that died at Baker’s hand.

Kelsey Ketch is a young-adult/new-adult author, who works as a Wildlife Biologist in the state of North Carolina. During her free time, she can often be found working on her latest work in progress or organizing the New Adult Scavenger Hunt, a biannual blog hop. She also enjoys history, mythology, traveling, and reading.

For more information, please visit her site at kelseyketch.com.