I first ran across The Witching Hour in the Fellowship of Fantasy anthology, Paws, Claws, and Magic Tales. It was a standout story that made my top list of shorts in the anthology.

So when Savannah put out a call for a blog tour, I had to jump on board.

Not only is the part I read adorable, it features magic, fantasy, romance, and cats. A purr-fect blend, if I do say so myself.

Anyway, this blog post is packed with goodies: an excerpt, a giveaway, an interview with a certain adorable wizard, and more.

Make sure you read all the way to the bottom so you don’t miss anything! 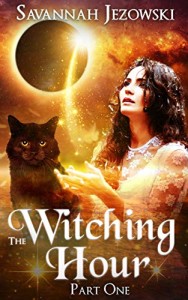 The Witching Hour Part One

As shadows encroach on the city of Lite, one cat stands between humanity and the hounds of darkness.

Romeo takes it upon himself to find a suitor for his human Isabel in order to save the city and sets his sights on the unlikeliest of candidates.

Can true love really save the day? 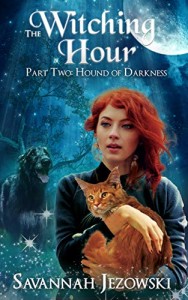 When Isabel disappears in the middle of the night, matters take a turn for the worst.

Romeo finds himself trekking through the dangerous wildlands to rescue the young queen with a clownish wizard, a sassy she-cat, a pretty healer, and a mysterious solider. However, their only hope may be the very thing Romeo fears most.

Can Romeo and his friends save the day before the shadows consume them?

The Witching Hour is a frolicking fantasy adventure with fairy tale themes and clean romance. Perfect for fans of Diana Wynne Jones

An Interview with Cyril 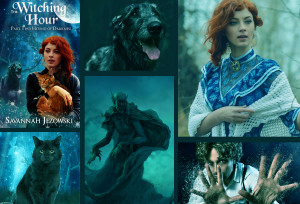 AL: Cyril, you’re a wizard. Do you know Harry Potter?

C: Harry who? Never heard of him.

AL: Heh. Too bad. How about this: Where did you learn your magic?

C: I’m so glad you asked. A lot of people are a little uneasy around wizards—you know, that whole magic thing puts people off a little. I went to the Royal College in Lite when I was about ten years old. They taught me how to control my magic instead of letting it control me. I also learned how to keep the city safe from the shadows that want to take over.

AL: I’m sure the city is grateful. Can you tell us more about what you and other wizards do for Lite? Anything you specialize in?

C: In Lite, wizards spend most of their time trying to protect the city. The king and queen have a magical connection to the city and keep the lights on, but the wizards help maintain the light they provide. We help make sure the shadows and hounds of darkness stay OUT of the city.

I can also do fun things like break chimney enchantments and torment fat palace kitties.

AL: Awww, poor cat. On that note, do you have any favorite spells?

C: Our magic isn’t actually spell-based. It’s more instinctual, tied into thoughts and body actions. We never studied spell books or wand-use or anything like that. Anyway, I rather enjoy picking on a certain black kitty who lives in the palace. Sometimes he needs to be reminded he isn’t the only magical creature in the world, and I’m only too happy to help him with that.

AL: Sounds like a typical cat. Haha. Have you had any entertaining magical accidents, picking on magical cats and all?

C: Well, actually, I’ve been luckier than most. Personally I haven’t been the brunt of any magical mishaps. However, before I knew I was gifted with magic, I used to make things happen to my brother Ives when he got on my nerves. Never anything serious, but things would fly at him out of nowhere or he’d slip and fall over obstacles that didn’t even exist. One time I accidentally gave him the worst case of hives. The local healer couldn’t figure it out until he realized the condition wasn’t medical…but my fault. I felt bad. Not a lot. But a little. Ives can be a pest sometimes.

AL: Ah, the love of brothers. Speaking of love, are there any special ladies in your life?

C: Ahem. Yes, well, there is this one girl. She’s a little shy when you first meet her, but she’s honestly one of the most morally-grounded people I know. She takes her duties as a healer very seriously, even when it puts her own life at risk. And she’s cute, you know? She has this red hair and endearing smile…yes, I would say she’s very special indeed.

AL: Awww. I do love love. So, if you could have anything in the world, what would it be?

No, seriously, though, I think a world without the shadows is what I would want. They keep us trapped behind our walls, whispering dark thoughts when you’re not paying attention. It would be amazing to be able to step outside the city and just go for a walk in the woods, in the sunshine. I know it would put me out of a job, but I’d still go for it.

AL: I imagine that would be difficult. Let’s change things up a little. Cyril, what would you say is your greatest strength?

C: Things don’t get me down the way they do other people. My brother Ives for example takes things so hard and so personally…I’m not like that. Usually I can just let things roll of my back. I don’t usually fret about things, just see the problem, come up with a solution, and then do what needs to be done. I’m also terribly clever and quite good-looking, if I am allowed to say so. I’m not vain, though, not a bit.

AL: No. Not at all vain. *nervous laughter* Ahem. Let’s dive a little deeper, then. We know your strengths, but what’s your greatest weakness?

C: Well, I’m not sure I’d consider bacon and a certain red-haired girl weaknesses. I suppose, if we’re being honest about this, I can be a little too set in my ways. It can be hard for me to admit that other people may be right. I also tend to be a little flippant when I ought to be more serious. Is that a flaw?

AL: Well, let’s test that out. Here’s a rather serious question: Who is your hero and why?

C: He doesn’t know it, but my brother is probably the closest thing to a hero I have. He’s got his flaws—don’t all heroes, in the end? But he’s also good to the core, in a grouchy, don’t-touch-me sort of way. I can’t think of anyone I’d rather have at my back, when things go bad. Sure, he may need a prod in the right direction sometimes, especially where his own happiness is concerned, but he’s got grit. I’ll say that for him. Not many people could do what he does and not buckle. I mean that literally. If you read my story—I mean, Romeo’s story—you’ll learn all about that.

AL: And there you have it, folks! Cuddle up with the dreamy Cyril in The Witching Hour

Excerpt from The Witching Hour: 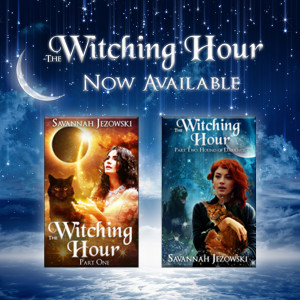 I was beginning to think this Pursy—I refused to call her Lady—was utterly insane. “Well, who is your dog-eaten human then?”

I rolled my eyes in exasperation. Of course. It only stood to reason, with the rotten luck I’d been having so far today, that this strange orange cat had been telling the truth about one thing. If she really was here with the royal healer, then she’d officially been invited into the palace and hadn’t forced her way in like a common scoundrel wanting to raid the kitchens. It would make it that much harder to get rid of her.

“Fine. I’ll show you to the king’s room, but after that you’re on your own. I don’t have time for this.”

“So you’ve said. Why are you in such a hurry?” she asked as I outpaced her and diverted her down a different hallway, toward the servants’ stairs. I wasn’t about to take her up the main access just to pamper her feminine pride and overly inflated sense of self-worth.

“I’m looking for my human, if you must know.”

She clucked in surprise. “My, my. You’ve lost your human. Now that is embarrassing.”

The fur on the back of my neck bristled. “I haven’t lost anyone. She’s merely misplaced herself.”

“Yes, because humans do that all the time. Misplace themselves.”

I was beginning to wonder if I might take her down to the dungeons instead of the bachelor’s wing, and if anybody would notice her absence. She followed me up the servants’ stairs without complaint, her paws a whisper against the worn, wooden steps. We came out on the far side of the bachelor’s wing.

I sat down and refused to go an inch further. “The king’s suite is at the end of the hall.”

“Hmm, thank you, you’ve been most kind. If you want to wait a few minutes until I’ve finished, I can help you look for your human, if you like.”

She blinked at me and waited, clearly expecting a response. She sounded sincere, but I didn’t trust her any further than I could spit, and since I wasn’t a llama, I couldn’t spit far. Isabel had read a book about llamas once, and apparently, they were admirable spit-hurlers. I, on the other hand, was not.

“Thank you,” I finally replied as I lifted a paw to lick the black fur into place. “However, I don’t need your help.”

Her eyes narrowed. “I see. If I might give you a piece of advice, oh dark and independent one.”

“Yes, well,” she continued, ignoring me and clearly intending to say what she was thinking anyway. “Someday you may find that being an island unto yourself sends you sinking to the bottom of the ocean. I hope I’m there to watch the bubbles as you go down.”

She speared me with an annoyed look before she turned on her heels and padded away, her tail flicking in irritation with every step of her small paws and sway of her slender hips. 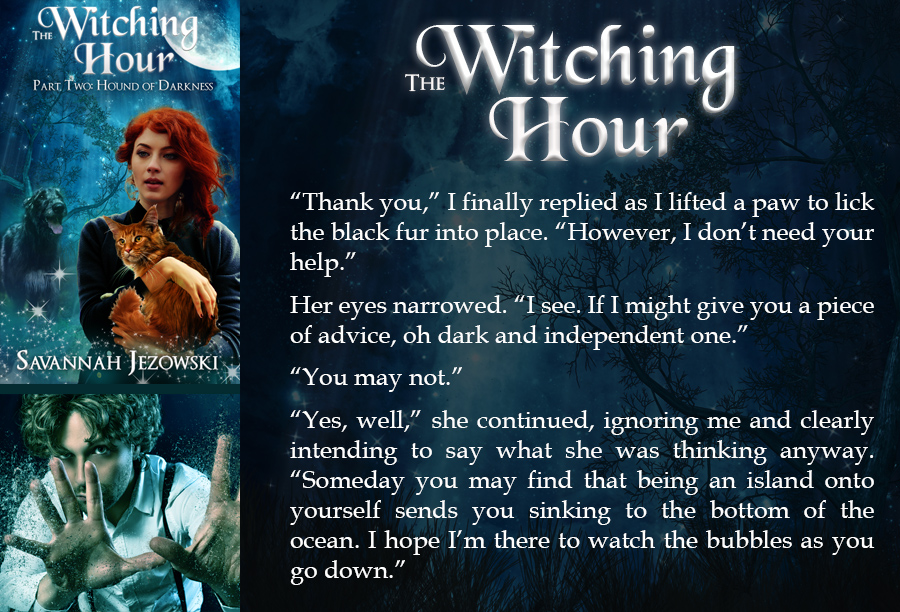 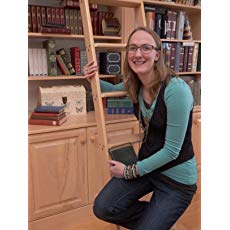 Savannah Jezowski lives in Amish country with her Knight in Shining Armor and a wee warrior princess. She is the founder of Dragonpen Designs and Dragonpen Press, which offers author services such as cover design, developmental edits, and interior formatting.

Her debut novella “Wither” is featured in Five Enchanted Roses

, an anthology of Beauty and the Beast retellings

, and is a prequel to The Neverway Chronicles, a Christian fantasy series filled with tragic heroes and the living dead. She is also the author of When Ravens Fall

, a Norse Beauty and the Beast retelling.

, Tales of Ever After

When she isn’t writing, Savannah likes to read books, watch BBC miniseries, and play with cover design. She also enjoys having tea with her imaginary friends.

Want to know about sales and new releases? Sign up for Savannah’s newsletter. 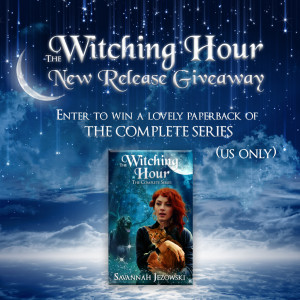 **Giveaway is for a paperback of The Complete Story (Parts One AND Two) and is available for US Participants ONLY.
Giveaway ends March 30.

If you’re interested in supporting Savannah on her blog tour, you can see other posts here (including some with reviews!): 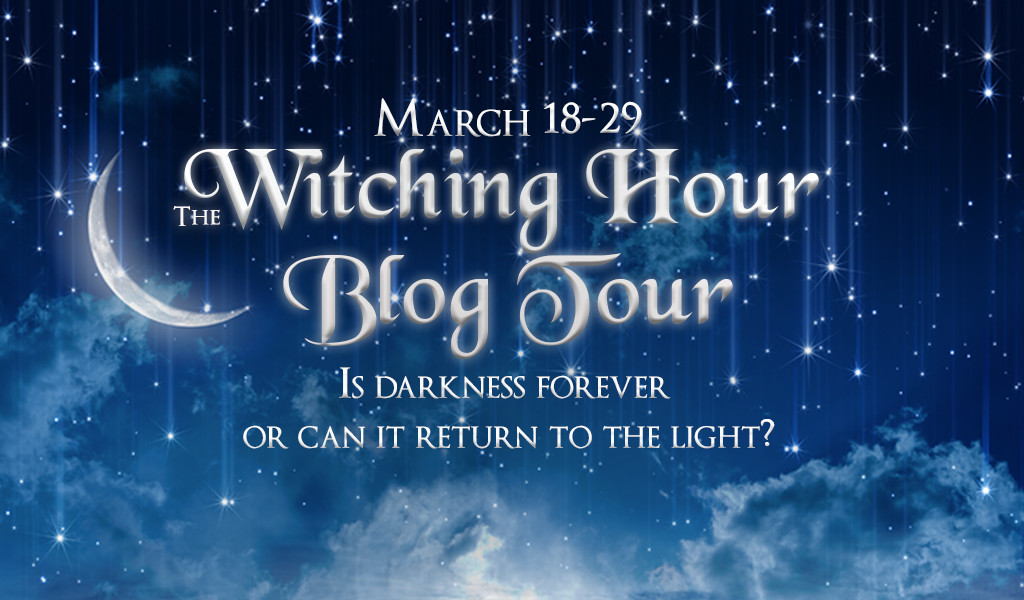