The Thirteenth Guardian
by K.M. Lewis 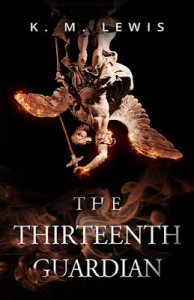 Michelangelo concealed an explosive truth in his famous Creation of Man fresco in the Sistine Chapel at the Vatican. Everything we have been taught about Eve is wrong—she didn’t cause the fall of man. Instead, Eve carried a far more devastating secret for millennia; one that will change the world forever.

As the modern-day world suffers the cataclysmic effects of the “Plagues of Egypt”, Avery Fitzgerald, a statuesque Astrophysics major at Stanford, discovers that she is mysteriously bound to five strangers by an extremely rare condition that foremost medical experts cannot explain. Thrust into extraordinary circumstances, they race against time to stay alive as they are pursued by an age-old adversary and the world around them collapses into annihilation.

Under sacred oath, The Guardians—a far more archaic and enigmatic secret society than the Freemasons, Templars, and the Priory—protect Avery as she embarks on a daring quest that only legends of old have been on before. Avery must come to terms with the shocking realization that the blood of an ancient queen flows through her veins and that the fate of the world now rests on her shoulders.

The Thirteenth Guardian is on sale for only $0.99 through July!

Is our history more interesting than we have been taught?

One of the paths of research for The Thirteenth Guardian that was especially captivating was the alternative view of the history of our world and the stunning evidence that exists in just about every continent. I had to grow comfortable with being open-minded enough to look at the new information and explore what that new information meant.

The easiest illustration are the Egyptian Pyramids. Schools in the U.S to this day still teach that the Pyramids were burial chambers for Egyptian Pharaohs. It’s in the curriculum—I know because my daughter brought home a test-prep kit two months ago with that information. I was surprised to learn that not a single tomb or mummy has been recorded to have been found in the Pyramids. In contrast, the vast network of tombs in The Valley of the Kings, where King Tut’s mummy, for example, was found, have extensive hieroglyphics on every single wall that celebrate the life of the pharaohs buried there. The Pyramids don’t have a single hieroglyphic depicting any Pharaoh buried therein.

So, if not constructed as a burial chamber, what was the purpose of the oldest, and only remaining wonder of the ancient world? If you look up H-Blocks in Puma Punku or Vimanas in India (which many temples in India are designed after), you are confronted with strange artifacts staring right back at you that are more than ten thousand years old.

There is an entire global community of very credible researchers and archaeologists, and a popular show on The History Channel that go into fascinating, although sometimes contradicting, detail about this topic. This community of professionals have been studying the topic for decades, and have uncovered some pretty amazing facts about the history of earth and ancient human civilization that have been largely ignored by the mainstream scientific community. As a lay-person reading the research and looking at images of the H-Blocks or the Pyramids—the thought that kept ringing in my mind was: something happened—something big…

The question is: what are we missing?

Excerpt from The Thirteenth Guardian

Mariko walked down the dimly lit passageway that opened up into a well-appointed bunker. The lights automatically came on when she and her three daughters walked in. The space was designed like an apartment with couches, beds, a kitchen—everything that one would need over a period of several months. In the middle of the kitchen was a black phone.

She led the three girls to a small adjoining room. “You all get fifteen minutes on your iPads, and then it’s night-night time.” She tried to remain as normal as she could so that the children would not detect the sense of fear that now fully consumed her. Mariko went back into the kitchen, picked up the phone, and dialed her husband’s mobile number.

“What is going on, Soki?” Mariko cried hysterically as soon as her husband picked up. “We are locked in some bunker in the middle of nowhere. I think we are in China.”

“Mariko, please listen to me…” General Soki tried to project as much calm as he could muster. “I have spent the last year building the bunker you are in. The world is about to change, my love, and I fear that Japan might not make it.

“I need you and the kids to be safe. And I wanted to make sure that you have everything that you will need for the next six months. There is food, water, clothing, and medical supplies.”

“Six months? Where are you now—How am I supposed to survive with three girls on my own for six months?”

“Don’t worry, my love. I have to complete my mission over the next few days and then I will join you.”

“Promise me that you will come back to us. Soki, we can’t make it alone. We need you here.”

General Soki was forced to make a promise that he knew he would not keep. He knew that by the time he got his passenger to Europe, it would be impossible for him to get back to Asia in time.

He put the phone down and was overcome with despair at the thought of never seeing his wife and little girls again.

K.M. Lewis has lived in multiple countries around the world and speaks several languages. Lewis holds a graduate degree from one of the Ivy League Universities featured in his book.

When he is not writing, Lewis doubles as a management consultant, with clients in just about every continent. He does much of his writing while on long flights and at far-flung airports around the globe.

He currently resides on the East Coast of the U.S with his family.