Here’s one you might enjoy. This is a clean fantasy book/series (yay!) set in Australia (double yay!).

There’s an excerpt to get you started, and a giveaway, so make sure you scroll all the way to the bottom so you don’t miss anything.

We belong to the Earth, Lainie-Bug. We were sent here in human form for a reason. If you don’t know what to do, then just be human.

Right. Like that was ever a simple thing to do.

In the heart of the Wimmera region of Australia, an ancient gateway is kept hidden and safe by a creature so powerful that even the moon would obey her commands – at least it would if she had any idea that she wasn’t just a normal girl about to finish high school.

When a mining company begins some exploratory sampling near Lainie’s sheep farm, a family secret is revealed that makes her regret not having learned more about her heritage.

What she’s told by their farm hand, Harry, can’t possibly be true, but then the most irritating guy in class, Bane, begins to act even more insane than ever, until she can no longer deny that something very unusual is going on.

When Harry doesn’t return from his quest to seek help to protect the area from the miners, Lainie sets out to discover the truth of her heritage, and of the secret she’s been born to protect. 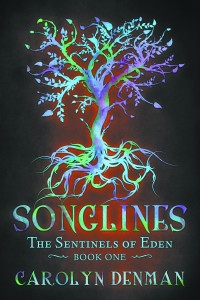 A cloud of black smoke filled the shed, accompanied by a sound that was not even remotely similar to that of a happily humming engine. In fact it sounded more like a drowning kookaburra.

‘Don’t rev it so hard. It’ll only flood,’ I suggested as I shoved the mess of tools aside with my foot. There was, after all, a slim chance that the dirt bike might actually make it outdoors at some point and it would need a clear path to get there.

‘It sounds more like it isn’t getting enough petrol,’ Nicole said, waving her hands around to disperse the smoke. ‘Turn it off before something catches fire.’ But her comments only made her brother rev it more.

The bike shuddered and made a few knocking noises, and spat out another fat puff of dirty exhaust. Then it began to purr.

‘Yeah, baby, come on,’ Noah coaxed it, wheeling it carefully forward like it was a trolley full of egg cartons. ‘Lainie, could you please move the sump bucket out of the way?’

I did, and he almost made it to the door before it started coughing again, and this time when he revved it, it screamed, bucked, and cut out with a petulant bang. I knew he’d flood it.

I wiped my oily hands on my jeans. ‘Want me to go and ask your mum for help?’

‘She’s not home, and anyway, I can fix it myself,’ Noah insisted. ‘I helped Caleb fix the pump for the top dam and we’ve had that thing since Adam was a boy.’

He sounded just like his dad when he used that phrase.

‘Yeah, but that was a diesel engine,’ I said.

I sighed. ‘Nothing. Just try it again. I’m sure all it needs is another six or seven attempts without actually fixing anything and it will just miraculously start to work. Have you noticed that the back tyre is flat?’

Nicole jumped down from her vantage point up on the tractor and followed us out of the shed. ‘This is boring. I’m going to check on Curly. I reckon she’s dropped and she’ll lamb today.’

Curly was a ewe that Nicole had raised as an orphaned lamb. How Nicole could even tell which one Curly was amongst the other sixty or so sheep in the same paddock was beyond me. In fact, my guess was that she couldn’t. She was only eight years old but loved to pretend that she knew everything there was about farming. Her favourite trick was to announce when each ewe was due to lamb and then brag about it when a new baby appeared. It didn’t seem to matter if it was the wrong ewe that had dropped. Today Curly would be whichever ewe was next to produce a sparkly white bundle of wool.

‘I should probably go too,’ I told Noah. ‘Aunt Lily wants me to help her clear out the small hay shed.’ I retied my long hair back into some semblance of its original plait. The residual oil left on my fingers made it a bit easier than usual.

Noah sat back on his heels, poking at the back tyre as if that would help him assess how much pressure was in it. ‘What for? It’s the wrong time of year for cutting hay.’

‘Apparently we’re buying in some extra from a contractor in Bridgewater. Harry’s done some deal with him and got a good price. He reckons we won’t have enough from our cut.’

‘Righto. Did you want a hand?’

My eyes narrowed. What thirteen-year-old boy offers to spend a sunny Sunday afternoon helping clean out his neighbour’s hay shed? Normally he’d be trying to pester Liam and Caleb into letting him tag along with whatever they were doing. ‘Where are your brothers?’

He looked up at me from under his long blond eyelashes. His green eyes were overly innocent. ‘Mum took them to Horsham to buy clothes for their school formal. She threatened to dress them the same if they didn’t come and choose something.’

‘So what are you supposed to be doing while they’re gone?’ I asked.

‘That assignment on Nalong’s Dreaming stories.’

‘That was due nearly two weeks ago,’ I said. He blinked at me, uncaring, and I rolled my eyes. ‘Just get it done, Noah. I’ve already given you my notes.’

‘Harry said they’re wrong. He told me some extra things to put in.’

‘And what would a farmhand know about writing an English essay?’

Noah frowned at me but I ignored him. Harry was not in my good books.

‘You’re still mad at him for not giving that newspaper clipping back,’ he guessed.

‘Can your aunt talk to him?’

‘She won’t. She says I’m overreacting.’

‘I don’t blame her. You’re totally bonkers.’ He opened the petrol cap to check the level. ‘Hey, this is empty,’ he announced brightly. ‘No wonder!’

Two minutes later he was tearing up chunks of grass and mud as he gave his new hand-me-down dirt bike a spin in the first paddock that was out of sight from the house.

Carolyn lives on a hobby farm on the outskirts of Melbourne with her husband, two daughters, and her parents. The fact that she always has at least three of her pets following her around at any one time in no way means that she is the fairest in the land. They probably just like her taste in music.

As well as writing stories for Aurealis and Andromeda Spaceways magazines, Carolyn is also the author of the YA Australian fantasy series The Sentinels of Eden.