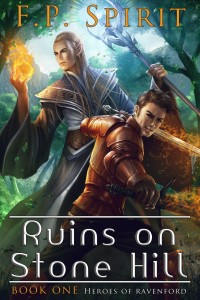 That’s what Glolindir thought, until he came across his first real monster.

Luckily, he survived, thanks to his new “friends.”

Lloyd, the reckless young warrior with blades of fire.

Seth, the sarcastic halfling who might be an assassin.

Aksel, the genius little gnome whose very touch can heal.

Little did they know that things were about to go from bad to worse.

After one hundred and fifty years of relative peace, dark forces stir around the little town of Ravenford—monsters, black magic, creatures of the night.

The only thing standing between Ravenford and certain destruction is this band of young misfits.

Excerpt from Ruins on Stone Hill

Glolindir spotted the monstrous orc at the same time as Seth. The wizard waited till it charged, then lifted his arm and pointed a finger at it. As he did so, mana, the energy that flows in and around all things, gathered within him. He drew the energy inward with concentrated will and focused it with a gesture. All that was needed now was a verbal command to trigger it.

The orc had closed half the gap to the lead wagon when Glo spoke the words that released the spell, “Nullam Telum.” A projectile of arcane energy leapt from his finger and spiraled out toward the charging creature. The purple missile met the beast in midstride and connected with an audible thud.

The monster appeared neither shaken, nor hurt. Instead it merely glanced down at its chest, reached up with its free hand, and touched the smoldering spot.

Glo’s eyes went wide. This huge orc was far tougher than he imagined—he had severely miscalculated. He watched in horror as the creature dropped its hand and turned its feral gaze toward him. An evil grin spread across the monster’s maw, then it charged.

Glo froze in place, unable to move a muscle. He had been so sure of himself. He had studied his spells and creatures and practiced his art tirelessly. Yet none of that had prepared him for this. Here was a real live monster bearing down on him, fully intent on ripping him limb from limb. It swiftly closed the gap between them and would be on him in seconds.

My father was right. He was woefully unprepared to cope with this. At that moment, he wished that he had listened to his father’s advice and stayed in the safety of their elven home.

Aksel climbed out of the wagon just in time to see the creature rushing toward them. “Well, that doesn’t look good.” 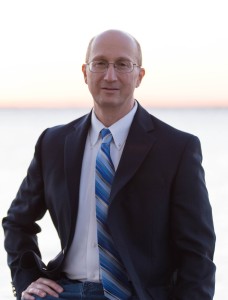 F.P. Spirit has always loved fantasy. From the moment he received his very first copy of Lord of the Rings back in high school, he was hooked. Today, somewhere between work and family, F. P. manages to write young adult sword and sorcery fiction. His series, Heroes of Ravenford

, chronicles the adventures of a young band of misfits in the dangerous world of Thac. The last book in the series, The Baron’s Heart, is due out this fall.