Almost forgot! (The holidays have really been messing with me this year, lol.)

Check out this Arthurian legend retelling, complete with an excerpt and a way to get free books from the author!

Make sure you read to the bottom so you don’t miss anything. 😀

I, Guinevere
by C.K. Brooke 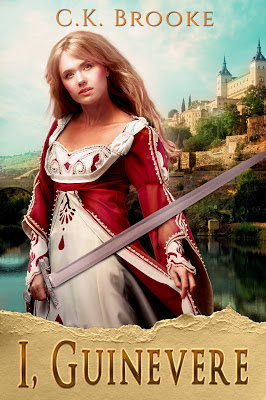 If you think you know the story of King Arthur and his mythical sword, think again. Your legends have it wrong.

Here’s the truth: I was never married to Arthur, and he wasn’t a king. Because Arthur never pulled that sword out of the stone. I did.

On the winter solstice, a mysterious sword in a stone appears in the churchyard. Not even the mightiest of the village men can remove it, until fifteen-year-old Guinevere gives it a try. The sword heeds the unsuspecting maiden, proclaiming the unthinkable: she is the blood of Pendrakon, heir to the vacant throne of Camylot.

Guinevere never dreamed she was born royalty. Now, between apprenticing the eccentric wizard, Merlyn; swordplay lessons with an abrasive—albeit, attractive—boy named Lance; and clandestine, magical meetings with the formidable High Priestess of Avalon, Guinevere is swept up in a whirlwind of training and preparation for her monumental new role as future queen. But invasions by the barbarous Saxyns and visitations from mysterious dark forces continually warn that she may be in over her head. Can Guinevere defend the kingdom from the darkness and deception that threaten to seize it? Despite her doubts and the sinister forces working against her, can she harness the power to wield Exkalibur and rule the realm? Or is Camylot already destined to fall?

From the unstoppable pen of C.K. Brooke comes a fresh and unforgettable new retelling seeped in Arthurian mythology. Queen Guinevere has her own tale to share, and it’s nothing like what you thought! Experience the magic and myth of Camylot, Avalon, Merlyn, and Exkalibur like never before as, in the vein of Brooke’s award-winning Secrets of Artemis, this legendary maiden of lore recounts her side of the story.

The silver sword sparkled as I approached, pleading—nay, burning—for me to reach out and touch it. An unusual, dazzling haze surrounded the artifact. I blinked, worried my vision had gone blurry. But the sword, the stone, and everything around me was in perfect focus.

I could hear the sword humming. Buzzing like a swarm of insects. It was alive.

Had any of the other contestants noticed this? If so, why weren’t they all talking about it?

Ancient runes I couldn’t decipher were carved into the hilt. Up close, I saw the pommel was forged in the shape of a dragonhead. Compelled by magnetism, my hand closed over it. The rounded dragonhead fit perfectly in my palm, as if designed for me. It vibrated fiercely, eager beneath my touch.

I brought my other hand over the hilt and heaved.

There was no need to strain. The blade slid out with ease. The stone was like churned butter, the illusion of rock. While I heard the gasps of the crowd, I was immune to it all. It was just me and the magnificent sword that claimed me.

The villagers erupted in uproarious applause.

“We’ve a champion,” bellowed the deacon. Before I could stop him, he lifted my sword-wielding arm high, and yanked down my cowl for all to see my face. The downward thrust of my hood pushed my hair ribbon along with it. My long blonde hair came tumbling past my shoulders.

The applause died. I lowered my arm, bracing myself for the blowback.

Another scratched his head. “Why was she allowed to enter?”

“Someone get that sword out of her hands,” cried the laundress, “before she hurts herself!”

I stepped back, clinging to my prize. The deacon stammered, confounded.

Arguing broke out. Although I well understood that the sword—which now hummed serenely in my hands—was exceptional, I wondered why they were so upset. It was just a contest, after all. So what if I’d won?

At this, the old, bearded man advanced on his staff. “Nay.” He spoke in a firm, resounding timbre, silencing the crowd at large. “No witch could’ve enchanted that sword out of that stone.” He glanced over at a formidable-looking woman I hadn’t noticed until then was with him. Her raven hair was graying but lustrous. She wore a set of flowing, lavender robes, her posture practically regal. “Right, Vivien?”

The woman nodded sagely. But her deep, knowing eyes flitted with evident suspicion.
Morgan’s teacher. I shuddered on my best friend’s behalf. No doubt Morgan would be in high water for the stunt she’d pulled with the glamoured coin. I didn’t envy her position. Lady Vivien, High Priestess of Avalon, was the most intimidating woman I’d ever seen.

The old man drew himself to full height. “The sword,” he indicated the one I held, “Exkalibur, responds only to the blood of Pendrakon. Which means no one but a Pendrakon could have pulled it from the stone. Therefore,” he paused, the crowd held its breath collectively, and my heart began to pound before I even understood why, “the young lady is, unquestionably, the blood of Pendrakon, and heir to the throne of Camylot.”

Had it not been for the weight of the sword keeping me rooted, I would’ve tottered to the ground on the spot.

Heir to the throne?

C.K. Brooke is an award-winning indie author of over a dozen romance and fantasy novels. Her debut novel, THE DUCHESS QUEST (48fourteen, 2014), was selected by Shelf Unbound Magazine as a Top 100 Notable Indie Book of 2015, and her YA novel, SECRETS OF ARTEMIS, received the Indie B.R.A.G. Medallion Award in 2017.

She is also the author of THE WRONG PRINCE, a Readers Favorite five star recipient and Global EBook Award Honorable Mention title, as well as the historical romance, CAPTURING THE CAPTAIN (Limitless, 2016), which was a RONE Award Nominee and a Finalist in the MMRWA Best Banter Contest.

She lives in Michigan with her husband and son.

Visit her at www.CKBrooke.com and subscribe for a FREE eBook!