There’s an excerpt and giveaway with this tour, which features monstrous elves and a young girl whose maybe more monster than not. Check it out!

The Duality of Nature
(The Monster of Selkirk #1)
by C.E. Clayton 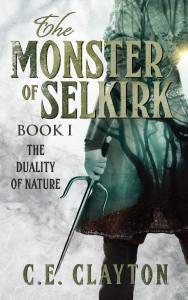 Monsters come in many forms, and not everyone knows a monster when they see one.

After three hundred years of monstrous, feral elves plaguing the island nation of Selkirk, everyone believes they know what a monster is. Humans have learned to live with their savage neighbors, enacting a Clearing every four years to push the elves back from their borders.

The system has worked for centuries, until after one such purge, a babe was found in the forest.

But when the elves gather their forces and emerge from the forests literally hissing Tallis’s name like a battle mantra, making friends is the least of her troubles.

Tallis and her companions find themselves on an unwilling journey to not only clear her name, but to stop the elves from ravaging her homeland.

Excerpt from The Duality of Nature

Tallis realized almost too late that she had completely outrun Donovan, as her top speed was much faster than that of any normal person. She found herself standing alone at the end of the street as it opened up to show the monastery under siege.

Tallis saw herself reflected in the bright, evil eyes of the elves as they turned to regard her: outlined by the burning homes behind her, with her matching trident-shaped daggers in her hands. Her white blonde hair, flowing lightly in the hot breeze, appeared as if it were made of liquid fire itself. Her eyes like gems that held the ocean within their depths. In that still heartbeat, Tallis shuddered. She looked like a beautiful terror, and only Rosslyn and Tomas would be able to tell that she was their salvation and not the cause of their worst nightmares come to life.

As the elves broke from their momentary stupor, they ceased their attempts to enter the monastery. Hissing in unison they said, “Tallissssss,” as they pointed their sharp talons in her direction.

She could hear the faint gasp of the survivors in the monastery tower as understanding dawned upon them that this was the girl that was making history: the girl who caused the entire elven race to rise up and riot across all of Selkirk. 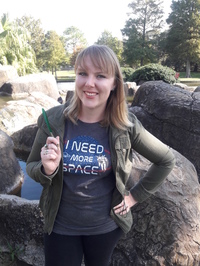 C.E. Clayton was born and raised in the greater Los Angeles area, where she attended the University of Southern California for both her Bachelors and Masters, and then worked in the advertising industry for several years on accounts ranging from fast food, to cars, and video games (her personal favorite). After going the traditional career route and becoming restless, she went back to her first love—writing—and hasn’t stopped.

She is now the author of “The Monster of Selkirk” series and her horror short stories have appeared in anthologies across the country.

More about C.E. Clayton, including her blog, book reviews, and poetry, can be found on her website. She’d also be thrilled if you followed her on Instagram and liked her bookish and pet photos, and Amazon where you can get updates on her new releases. And there’s always Facebook, if that’s your thing.