You’ve seen this come through before, but it’s releasing tomorrow, and today there’s a giveaway and excerpt to get everyone excited! 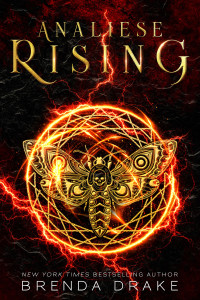 When a stranger gives Analiese Jordan a list of names before he dies, the last thing she expects to see is her own on it. Not. Cool. Her search for answers leads to the man’s grandson, Marek, who has dangerous secrets of his own. Both are determined to unlock the mystery of the list.

But the truth is deadly.

Analiese is a descendant of the God of Death, known as a Riser, with the power to raise the dead and control them. Finding out she has hidden powers? Cool. Finding out she turns corpses into killers? No, thank you.

Now the trail plants her and Marek in the middle of a war between gods who apparently want to raise an army of the Risen, and Analiese must figure out how to save the world—from herself.

“Come on, Marek. Quit messing around.”

A smell of sulfur wafts through the air.

The light nears and grows, forming into a body. Into a ghostly-looking man. Anger is set on his almost transparent face. The sockets where eyes should be are dark and empty.

I know his face. A face seemingly hanging loosely off sharp bones. A face I’ve seen in duplicate.

I scramble on my back up the stairs, make it halfway before I lose my footing, and slip back down. Pain sears my back.

“What do you want?” I try to yell, but it comes out more like a croak.

The ghostly figure moans and keeps moving toward me. Several similar lights begin to form behind him, and I want to close my eyes, but I’m not sure that will make them go away.

The others form faces, and there are so many of them. I recognize some of them from their headshots taped in Isabella’s record book.

A chorus of hatred.

I slowly move back up the stairs, afraid to go fast. There are so many faces. Old and young. Men and women. Bile rises in the back of my throat when I spot a little girl in the mix.

“What do you want?” I’m sobbing, my words are wet, and there’s no air behind them.

The moaning turns to screeching.

They stop at the foot of the stairs. Faces turn up to me, watching me with hollow eyes. Expressionless faces. All their emotions are saved for the hideous moaning. It’s full of pain and anguish. Torture.

Their second deaths flip through my mind, and I can’t stop it. Each the same. They wake up suddenly and look around dazed. I can see the mortuary. Other bodies on tables.

Confusion. Isabella says something, but I can’t understand her. It’s in Italian. She makes notes. Picks up a plastic bag, covers a man’s head with it, and suffocates him.

It flickers in response.

The images and moaning stop, and the whispers hiss around me.

Scratching noises come from behind the wall on either side of me. No matter how tight I cover my ears, I can still hear the hissing chants of the spirits and the frantic scraping of whatever is on the other side of the walls.

It’s like demons have control of my head. This isn’t real.

Something is making me see these things. Push it away. Stop it.

And the lantern goes a little dimmer.

“Marek!” Where the hell is he?

Something breaks through the wall on my left.

The flame puffs out.

From the Author: Top 10 Gods of Analiese Rising

There are several gods in Analiese Rising. Listing my top ten favorite gods and goddesses from the mythologies from around the world was difficult. There are so many that would make number one for me. So I decided to list them in the order of my favorites in the book, and here they are.

There we have it, ten of my favorite gods and goddesses from Analiese Rising. Who are your favorites from the mythologies around the world?

Brenda Drake grew up the youngest of three children, an Air Force brat, and the continual new kid at school. Her fondest memories growing up is of her eccentric, Irish grandmother’s animated tales, which gave her a strong love for storytelling.

With kids of all ages populating Brenda’s world, it was only fitting that she would choose to write stories with a bend toward the fantastical for both younger readers and the young at heart. And because she married her prince charming, there’s always a romance warming the pages.

Her favorite books are The Secret Garden by Frances Hodgson Burnett, The Lion, the Witch and the Wardrobe by C.S. Lewis, Kings Row by Henry Bellamann, and Anna and the French Kiss by Stephanie Perkins.

When she’s not writing, she hosts workshops and contests for writers such as Pitch Wars and Pitch Madness on her blog, and holds Twitter pitch parties on the hashtag, #PitMad. In her free time, Brenda enjoys hanging out with her family, haunting libraries, bookstores, and coffee shops, or just reading someplace quiet and not at all exotic (much to her disappointment).