“You thought I did this out of the goodness of my heart?” He gave a short mirthless laugh. “Not a bit of it, this is going to be dangerous for me. What are you offering for my help?”

Beneath the Amber Sky, the nobility control the food, education, and the mysterious C.O.I.L.S of Copper and Brass. To Tay, struggling to keep her siblings alive, the ideas of rebellion and freedom are distant and unreachable.

But when her father is arrested, she begs Darius James, the son of the Overseer, to save his life. Darius agrees, but his help costs her a favour, one he can call in at any time.

Darius’ favour will bring her to the Palace, and the perfect position to help the growing rebellion. But the court has games beyond anything she has seen before, and Darius’ secrets will add to the danger.

Tay is now able to make a difference, to join the rebellion, find the C.O.I.L.S and discover the secrets of the Amber Sky. All she has to do is survive.

An Excerpt from Amber Sky:

“There.” Beth stepped back and pointed at the mirror. “Take a look.”

Set into the side of one of the wardrobes, and etched in gilt, the full-length mirror gleamed slightly in the light. With a sigh, Tay stepped forward. Her image swam into focus, and she took a step back, startled at the reflection she saw before her. The slightly timid house maid had vanished, replaced by some richly dressed stranger. The deep crimson dress fitted in all the right places, and the rustling taffeta held a glossy sheen which glowed beneath the lights. Small clusters of jet and crystal were stitched across the bodice and full skirt, and they glittered as the light struck them.

Tay slid her fingers across the fabric before turning her attention to her hair. The dark locks had been twisted into a mass of corkscrew curls and pinned to the crown of her head beneath of jet and silver fascinator. Her makeup had been lightly applied, and her face almost vanished beneath the magnificence of the dress.

“Oh.” Barely able to speak, she turned back to face Beth. “I look…”

“Beautiful,” Beth answered, a slight hint of regret in her voice. “And not at all like yourself.” She walked forward and brushed an imaginary bit of dust from the back of the dress. “Now you’d better get going.” She stepped back and jumped slightly as Tay flung her arms about her.

“Thank you.” Now that the costume of nobility had been donned, she felt somewhat better about the whole situation. Despite the slightly underfed cast to her appearance, the dress altered her entire façade. Visions of immediately being denounced as an imposter began to fade as she stepped back, and headed for the living room. She pushed open the door and stopped at the sight of Darius sitting in one of the chairs. As the door swung open, he jumped to his feet. Tay was gratified to note that his mouth opened slightly in shock as he took in her appearance. A moment of stunned silence fell over the pair of them as each regarded the other. Darius had also dressed for dinner, and Tay ran her eyes across his elegant garb in stupefied appraisal. He had been handsome before, but now, she closed her mouth as she realised that she was staring. 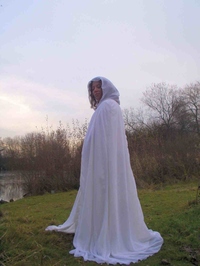 When I was a child, I made up games and characters when my sister and I played with dolls. As I grew older, I would make up scenarios and scenes, fully intending to write them down but never finding the time. In my late teens, I discovered the world of role playing and settled into an avid ‘geeky’ life of D&D, comics, sci-fi and fantasy fiction.

Years passed and I finally gave voice to the stories in my head.

I write romance, fantasy, action and adventure. I love tales of steampunk and history, tales of magical powers and dark curses lurking in the shadows. Though The Black Lotus

is not my first attempt at a novel, it is the first I have finished.

And some fun facts about me: