Well, this is just a little backwards, lol, but if you saw my cover reveal post about Dark Faerie, book 2 in the Alfheim Academy series, and wanted o learn more about book 1, well, here’s your chance. 😀

Plus, goodies! Check it all out: 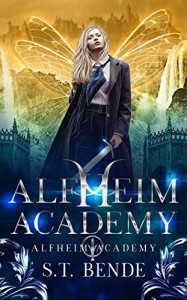 Aura Nilssen has spent most of her sixteen years in hiding. As crown princess of Alfheim, her life depends on avoiding the assassins who killed her parents and want to destroy her realm. When hunters corner Aura on Midgard (Earth), she’s immediately evacuated and enrolled at Alfheim Academy—a training ground where telepathic teenagers, daily combat lessons, and communication from beyond is the norm. She attends classes that enhance her energetic abilities, labs that fine tune her mental acuity, and workouts with a supernaturally good looking—and suspiciously evasive—training partner. But it’s what she learns outside the classroom that proves most difficult: as Queen of Alfheim, Aura’s grandmother played a heartbreaking role in the death of Aura’s parents . . . and her iron fisted monarchy is pushing the realm to the brink of extinction. If Aura doesn’t take her grandmother’s crown, the home she’s only just begun to love may be lost forever.

When an unprecedented attack threatens the very heart of Alfheim, Aura has to decide what she’s willing to sacrifice to protect her new home. Her choice may mean the difference between survival and annihilation—not only for Aura, but for the world she’s always been destined to rule.

I leaned forward, trying to see who Viggo was talking to, but my balance shifted unexpectedly. As I sidestepped to avoid a fall, a branch cracked loudly beneath my feet. I quickly scooted behind a tree and held very still as Viggo called out in a threatening voice, “Show yourself.”

I could take him if it came to it. I’d pinned him in five out of nine sparring matches that week. Or was it three? I couldn’t remember.

“I know you’re behind that tree.” Leaves crunched as Viggo stormed closer.

I inched around the trunk as my training partner’s footsteps grew louder.

“Last chance,” Viggo growled. He was unnervingly close. My eyes locked in on the thickest part of the tree line, and I rose onto the balls of my feet, preparing for escape.

Before I could make my move, a thick hand whipped around the tree to clutch my neck. Viggo yanked me from my hiding spot, wrenching my body into view. He held his arm perpendicular to his six-plus-foot frame, so I dangled in his grasp. In his other hand, he gripped a thick dagger. Crêpes. My hands flew to Viggo’s wrist and I dug in my fingernails, intending to break his hold before my air supply ran out. But as I clawed against his grip our eyes locked, and Viggo opened his palm. I fell to the ground in a heap, then leapt to my feet, brushing broken branches off my pants as I stood.

“You.” Viggo’s normally charming tone had an edge. “What did you hear?”

“I heard enough.” I widened my stance in case I needed to deliver a roundhouse. Or worse. “You broke into Alfheim? What are you doing here?”

“You don’t know what you heard.” Viggo took a step to his right. I mirrored him.

“Fine.” We continued our dance, two animals squaring off for a fight. “Then why don’t you tell me. Because it sounded an awful lot like you broke into the realm, and you’re planning something dangerous.”

“Is that so?” Amusement danced across Viggo’s eyes as anger percolated beneath my skin. I took deep breaths until the emotion stilled.

“What would you call what you’re doing?” I pressed.

Viggo’s features hardened as he took another step. “How was your meeting with the queen? Lots to catch up on, I’m sure.”

My eyes narrowed. “What do you care?”

“I care when someone strips my realm of its freedoms. Not that you’d understand anything about that.”

The anger bubbled again, fiercer. Hotter. “I’ll ask you one more time. What were you doing just now?”

“If I thought you’d understand, I’d tell you.” Viggo’s hand flexed, and his dagger glinted under the filtered light of the forest. My hands balled into fists and I took a step forward. I didn’t have a weapon, but if that jerk thought he could silence me, he had another thing coming.

Viggo stepped into my space, his chest inches from mine. I ignored the piney scent wafting off his training clothes and focused on perfecting my glare.

Viggo leaned back just enough to meet my eyes. “Someone looked out for you from the minute you were born. From where I’m standing, that’s a pretty good deal.”

“You don’t know the first thing about me.”

Viggo shifted so our foreheads practically touched. Butterflies burst into flight in my stomach and at my shoulder blades. What the hell is wrong with me?

“I know you’re the heir to the throne,” he growled. “I know you met with the queen. And I know you haven’t stepped up to challenge her. I can connect the dots as to which side you’re on.”

A low whistle pierced the forest as I sucked air through my teeth. Viggo Sörensson had no freaking clue. “You know I’m going to tell Signy about this.”

Viggo shrugged. “Go ahead. But for the record, I’m warning you to stay out of it. If anything happens, it’s on you.”

“Noted.” I took another breath as Viggo leaned forward again. His shoulder brushed against mine as he walked by, and the nudging at my back became so adamant, I was positive something was about to crawl right out of my skin. But the jabbing ebbed as Viggo marched forward. He didn’t turn around until he reached the thicker tapestry of trees.

Even at this distance, I caught the pop of his dimple. “See you around, Glitre.”

Then he turned and disappeared into the forest, leaving me with a litany of questions.

What was Viggo Sorenssön up to? 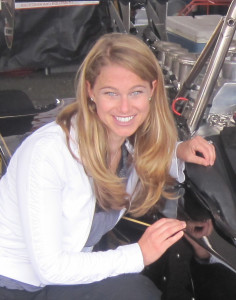 ). And her love of a galaxy far, far away inspired her to write children’s books for Star Wars. She hopes her characters make you smile, and she dreams of skiing on Jotunheim and Hoth.